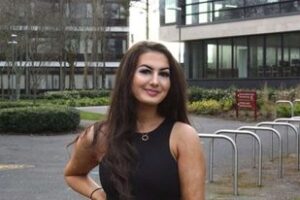 Sitting Vice-President, Welfare and Equality Officer Róisín Nic Lochlainn is the only woman in the race to become President of the NUI Galway Students’ Union.  Having seen first-hand how students had been abandoned and were struggling over the course of the academic year in her role as Welfare and Equality Officer, Nic Lochlainn wanted to continue her advocacy for students as President;

“I’ve seen the extent to which students are struggling and the everyday situations that come to me as Welfare Officer really put things into perspective as to how students really are struggling, especially this year. It’s a year that no other SU officer can say they’ve experienced, and I think that students have been abandoned so much by NUIG, by the government, by everyone this year.” she said.

Nic Lochlainn hopes to increase engagement within the Union as President, and noted that prior to running for the position of Welfare and Equality officer, she wasn’t a student engaged in the affairs of the Union, She also highlighted her successes in enfranchising a large cohort of disaffected voters over the course of her tenure as Welfare Officer this year, telling SIN,

The 21-year-old’s manifesto is based largely on issues that she has seen come before her regularly in her role as Welfare and Equality Officer. According to Nic Lochlainn issues relating to accommodation and renter’s rights have been raised by students regularly over the course of the academic year and she hopes to remedy these  through the establishment of a marks out of tenancy system, where students can honestly and anonymously rate their accommodation, a  Scéim Cónaithe where Irish language speakers have the option of living together and a system in Corrib and Goldcrest Village whereby LGBT+ students had the option of living with other LGBT+ students.

Mental health is another area which the Antrim native hopes to introduce several new policies including the introduction of a mental health check-in app. Based largely on the Covid-19 Tracker App it would ask students how they were feeling, those who answer “Not Good” would be offered guidance and contact numbers for mental health supports through the app.

Also included in the Nic Lochlainn manifesto is a commitment to increasing vegan and vegetarian products on campus, the establishment of sustainable Depop markets on campus when it is safe to do so, lobbying for a plastic-free campus, getting the University to commit to carbon neutrality by 2030, and to push for extra support for student parents and students during pregnancy.

Nic Lochlainn spoke of the importance of being able to continue her work from the Welfare and Equality portfolio as President and warned that a lack of continuity could be detrimental to the Union;

“I feel like it’s just going to be such an important year of advocating for students, and I feel that we can’t risk having anyone inexperienced, it’s just too much of an important year to not have somebody that has at least a little experience within the Union. I know that last year I came in with no experience but next year is too important. I’ve seen how the Union operates, I don’t think we can afford to have a month or two of training someone up. We need to go straight in to advocating for what the students need.” she noted.

Róisín appealed to voters to give her their number one vote on April 22nd due to her long history of advocacy and her experience in standing up for students’ rights. She also pointed to her LGBT+ Ally training and rape crisis disclosure training as examples of her experience in dealing with important student issues;

“The difference with me is that it is actions not words. This election isn’t about me it’s about the students, and it’s about making life better for students. The students who feel abandoned who are struggling. The hidden homeless, the students who can’t afford to eat every week. That’s the student body that I’m representing. I’ve been that student so I feel like I can relate to those students. I’m also the only Gaeilgeoir and the only woman on the ticket, I was successful in securing repeat fee waivers for recipients of the Financial Aid Fund and SUSI, I have all the training I have suicide prevention training I have mental health and first aid training from the HSE. I have Anti-Racism training, unconscious bias training. I do think that I’m the most qualified person to be President.” she finished.