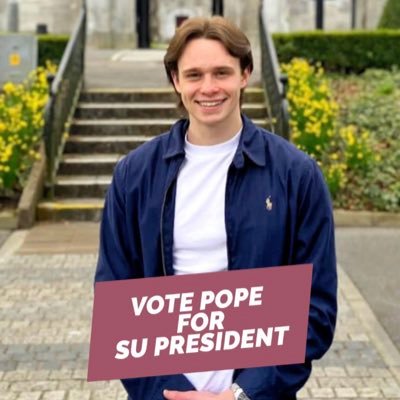 Final-Year Corporate Law student James Pope is a candidate in this year’s race for the Presidency of the NUI Galway Students’ Union. The 22-year old is keen to be a representative for the entirety of the student body, particularly those who he argues have been alienated form college life. Pope drew on his experience as a study abroad student at Willamette University in Oregon in comparing the sense of community felt within the student body there, and how he hopes he can bring that to NUI Galway;

“I am running to represent all students, I’m running not to just represent a fraction or a facet of students and I have to stress that I am running to represent people who have been alienated from college life, who don’t feel that sense of community, because I was definitely one of those students and I definitely felt out of touch and when I was able to go over to the US, and you know the way those campuses are that they have this amazing sense of community and I would like to bring that to NUIG.

“The Students’ Union is a clique and I think that having a different character in there is just beneficial for everyone. “

The Galway man is keen to use the experiences he gained during his study abroad year to help him influence policy and decision making at the Union’s top table. At the heart of Pope’s manifesto is a mandatory consent course that students would be required to pass in order to register for modules, a system which he says was implemented successfully in the United States;

“At the top of my manifesto is a compulsory consent programme. This is something I did myself when I was studying at the University in the United States. It’s a programme that many Universities in the US have adopted themselves. It’s tried and tested, So the basis of the programme is that students go through five video segments on consent, rape, sexual assault, sexual harassment and then there’s an added segment on the correct use of pronouns. You go through each segment and at the end of each segment you answer questions, and you have to get all the questions right to progress to the next segment and then when you get to the last segment it’s completed you’re done. And the way that they make this compulsory in Universities is that they make it part of the registration process.

Pope allayed fears that the programme would cause survivors of sexual assault to relive past experiences, but assured voters that there is an opt out option for students with those concerns telling SIN;

“Some people have said that this may be problematic for survivors, but there is an exemption policy with this programme where students can opt out of it if they feel that it may retraumatise them if they are victims and there are no questions asked . Someone asked me during the week would this mean that people would abuse this system. But the fact is it won’t be abused because I knew that I could be exempt from it but I just sat down and did it anyway.

“I don’t think there’s any other way and because I’ve done this, I know the value that it has, we have this idea in our head and it’s something that I studied in Criminal Law that you have this idea on your head of what’s called the real rape scenario- which is this violent act of a stranger at night and that isn’t the case at all. It could be someone that you know very well and it’s important for people to realise that many of us have seen with the recent discourse on Twitter that it just goes to show that this type of programme is needed.” he said.

Pope’s Presidential plan would also see a review of RAG Week and Christmas Day, comparing crime rates during in years before and after the events were made unofficial, the establishment of a major ticketed college event every month where nursing and midwifery students would go free, the adoption of the National Biodiversity Plan on campus which would dedicate 50 percent of green spaces on campus to pollenated gardens, a move to a paperless campus and the planting of 100 trees on campus to commemorate the centenary of the establishment of the Irish Free State.

Also central to the Knocknacarra native’s manifesto is the reduction of repeat fees to €100, the abolition of the 40% cap on repeat exams and the creation of a fairer timetabling system. He also favours an increased focus on mental health through the establishment of a mental health webchat and by allowing The Samaritans the opportunity to speak to students in lecture halls about mental health.

The Corporate Law Student was keen to reaffirm his position as an outsider within the political workings of the Union when asked why voters should give him their number one on April 22nd . Pope also highlighted his realistic yet ambitious manifesto and consent and mental health policies as reasons for the student body to cast their ballots in his favour;