A fantastic strike in the dying embers from Cork City skipper Becky Cassin was enough to snatch a point from the jaws of defeat for her side, as Galway WFC relinquished their iron grip on a captivating and enthralling game of football in Terryland.

It was a game which was end to end, and not even a masterclass from Rachel Kearns could keep the women in green at bay.

The hosts dominated from the outset, and it was in keeping with the game that Cassin’s strike five minutes from time was totally against the run of play.

That said, there were plenty of positives to take from how Galway controlled the tempo of the game, and were it not for an inspired performance from Abby McCarthy in the Cork goal there is no doubt where the three points would be resting.

Galway manager Billy Clery took the chance to offer three players their competitive bows for the club, including Slovenian ‘keeper Maja Zajc and former Peamount defender Chloe Moloney.  For the visitors, it was a debut for Sarah McKevitt, whilst Sophie Liston was  forced off in the opening exchanges following an unfortunate injury.

The Galway ladies had their Cork counterparts on the back foot from the off, and the pressure told at the first instance.  Shauna Brennan’s corner was inch-perfect and found the head of Rachel Kearns.  Kearns leaped highest to get purchase on the ball and direct it past Abby McCarthy for the club’s first goal of the 2021 season, and a goal which they will feel was well-earned for their consistent pressure.

Only six minutes later, the ball was in the net via the prolific Kearns again.  Some dogged pressing from both herself and Brennan saw them win the ball in the penalty area, before Brennan squared it to Kearns to make it a brace before the half-way point of Act One.

Cork City struggled to find any sort of creative spark as Clery’s charges pinned them back time and again, and continued to make life difficult with aggressive pressing.

It came as a surprise when Cork pulled one back on the half-hour mark.  It was against the run of play when Sarah McKevitt skipped past Savannah McCarthy on the left flank and fizzed a dangerous ball along the turf and across the face of goal.  Substitute Lauren Eaboloniu found herself unmarked on the far side, and her side-footed finish past the outstretched glove of Maja and over the line breathed life into the clash.

Seven minutes later, the visitors got their wish after a skewed clearance from net-minder Maja.  The new ‘keeper’s miskick fell to a Cork attacker, and following some pinball the ball fell to the feet of Éabha O’Mahoney, who opened her body excellently to curl the ball into the far corner and level proceedings.

However, the elation of visitors lasted a mere 45 seconds.  From the kick-off, captain Shauna Fox’s inquisitive ball into the box rebounded off the Cork defence and fell to Kearns.  Kearns’ goal-scoring form showed no sign of slowing up, as she let the ball drop over her right shoulder and unleashed a sumptuous volley to re-establish her side’s dominance.

There was a sense of disappointment from the Galway WFC contingent at giving away two sloppy goals, however  they couldn’t complain about their prowess in front of goal spearheaded by the talismanic Kearns. 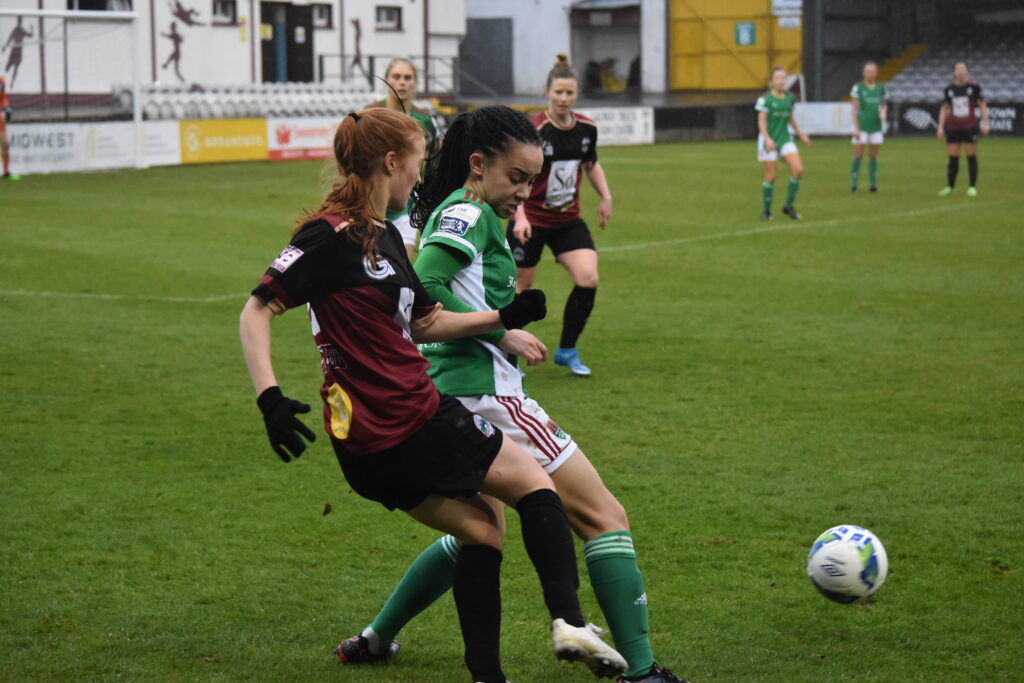 The frequency of goals in the first half didn’t carry on in the opening stages of the second, although that said it certainly wasn’t for a want of trying.  Zacj Maja redeemed herself in some style to deny Sarah McKevitt, before a magnificent double save on the hour mark from McCarthy.

McCarthy got down low to deny Kearns at the first point, before showing incredible reflexes to regain the ground and block Lynsey McKey’s daisy cutter.

Maja wasn’t to be outdone however, and was at the peak of  her powers to divert danger once more.

Galway squandered a golden opportunity to push the lead out to two for the second time of the afternoon after Lauren Walsh gave away a penalty for scything down Lynsey McKey who was barreling towards the goal.  Up stepped last year’s Under-17 captain Kate Slevin, however her accuracy was off as she arced over.

The penalty was only a brief reprieve from the goalkeeping heroics of the half, as McCarthy produced another fine stop to keep the goal-hungry Kearns at bay from long-range.  McCarthy had to be quick off the line again in the 75th minute following a defensive mix-up.  The red-hot goalkeeper was quick to smother the ball at Kearns’ boots 10 yards out.

It looked for all the world like it would be the hosts would be finishing the game with the three points in the bag, but such sentiments were turned on their head; once again against the run of play.  Éabha O’Mahony’s throw-in produced a scuffed Galway clearance.  Cork skipper Becky Cassin latched onto the ball with a fantastic looping shot from 30 yards that dipped under the bar to earn the visitors from the South a share of the spoils.

Galway almost snuck the winner as the clock ticked into the red. Shauna Brennan’s floated free-kick found the head of Shauna Fox in the 91st minute, and it looked a dead cert that the ball would be nestling in the back of the net.

Once again however,  luck was not in the favour of the hosts, and the ball rebounded outwards once again.  As the full time whistle shrilled, honours were even, and despite the best efforts of the hosts, they’ll have to settle for a point.