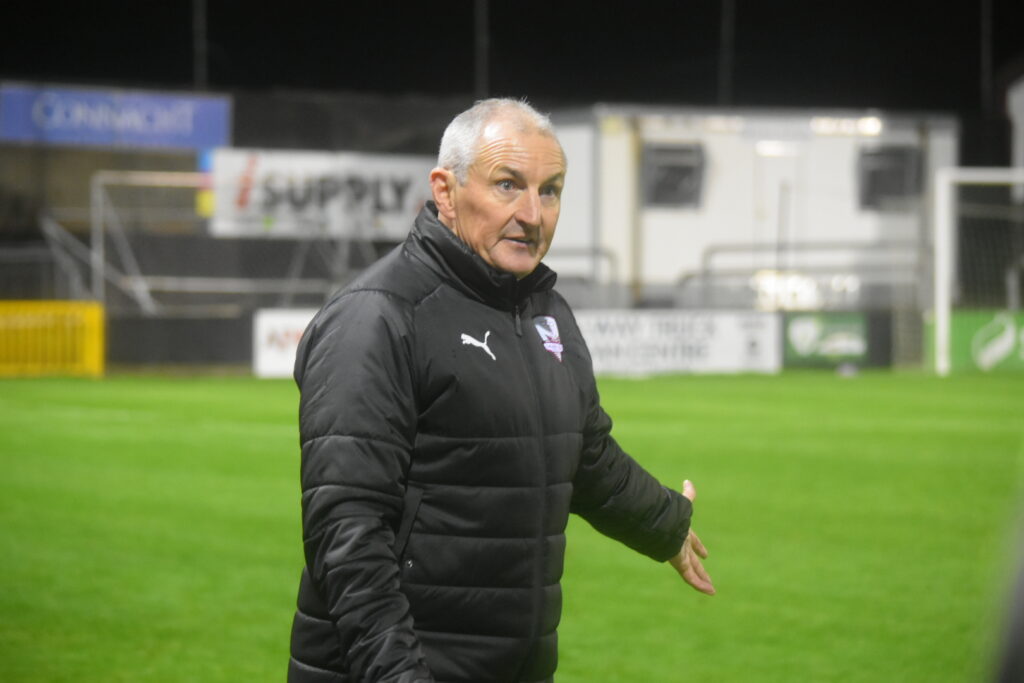 GALWAY United pushed Shelbourne to the pin of their collars in the League opener under the floodlights in Eamonn Deacy Park, however there will be a sense of bitter disappointment for the Tribesmen as they couldn’t break the deadlock in a 0-0 draw on their home patch

United made attempt after attempt to bang the door down, however a combination of a fine goalkeeping display from Brendan Clarke and mis-firing up front saw Shels head back to the capital with sentiments of a point gained having been down to ten men for much of the clash.

It took all of 50 seconds for the visitors to put the men in white under the cosh at the back.  Yoyo Mahdy’s attempt was blocked and fell favourably to JJ Lunney in a threatening position.  Lunney’s snapshot skewed high and wide.  An immaculate through ball from Shane Duggan mere seconds later had Padraic Cunningham cutting in with menace at the Shels defence, however his attempt from an acute angle was deflected behind for a corner.

Twelve minutes in, Shane Duggan was shown the first card of the First Division season by Eoin O’Shea for a scything challenge.

Georgie Poynton’s free-kick from the left pocket caused consternation for Conor Kearns between the sticks, who had to be alert to palm the ball away from danger.  Glen McCauley’s cross fizzed across the face of goal and was begging to be converted, but no-one in the black of Shelbourne FC was able to get the all-important touch.

Mikie Rowe’s free-kick from distance in the 24th minute was powerful, but Brendan Clarke didn’t have to break sweat for his first save of the evening.  A minute later, some commotion from a free-kick saw Clarke have to show agility and put in a bit more effort to palm away Padraic Cunningham’s header amongst the chaos.  From the resulting corner the ball was inches from crossing the goal-line, however the Shels’ defences blushes were spared by a fine goal-line clearance.

Whilst net-minder Clarke showed some silky footwork to evade the on-rushing Cunningham earlier in the game his pass left a lot to be desired as he gifted possession to Ruairi Keating on the edge of the box.  Keating was unable to pounce on the error however, as his attempt was wayward.

The game also saw the first red card of the First Division season, as Shelbourne’s Glen McCauley was shown the line five minutes from time.  McCauley was sent for an early bath after a truly shocking tackle in the centre of the park.

An altercation followed where everyone piled in, and McCauley seemed to lead with his head as he made his feelings known to David Hurley.  If there was any doubt that the red card was coming it was eradicated then, as the Shels attacker saw red and gave Ian Morris’ charges a mountain to climb.

As the clock ticked into the red there were chances at either end.  Firstly, it was the turn of the Tribesmen as the ball fell favourably to Shane Duggan, whose attempt inched over the bar.  Conor Kearns had to be at his best to tip away a pinpoint Kevin O’Connor cross which was destined for the head of Mahdy to keep matters even at the changeover.

Michael O’Connor was sprung by Shels at half-time replacing Yoyo Mahdy, and Shelbourne fans would likely have been disappointed not to see more of last season’s top scorer in the division.

The hosts came dangerously close to drawing blood five minutes in, and had it not been for heroics by Clarke in the Shelbourne goal.  Mikie Rowe showed strength to get beyond Ally Gilchrist and get his shot goalwards.  The shot was parried back into Padraic Cunningham’s path, and his daisy-cutter produced a fantastic double save to keep Galway at bay.

Whilst Shels were notably on the back foot due to their numerical disadvantage, there was little room for complacency for the Galway rear-guard as the prowess on the pitch from the Dubliners was clear to see.  Half-time substitute Michael O’Connor gave ample evidence of their potency as his beautiful curling effort had beaten Kearns before cannoning off the crossbar.

As the ball made its way to the other end, Clarke was once again ensuring that the clean sheet would be kept intact for the moment, reacting at short notice to keep Keating at bay.

As Galway raced away from the Shelbourne defence 70 minutes in, it seemed that the goal was at Shane Doherty’s mercy, however stellar defending from Max Kouogan to keep Galway out once again.

Whilst United kept pushing to try and break the deadlock the final pass always appeared to be just that bit off, and mis-placed passes coupled with resolute work from Shelbourne on the back foot made life extremely difficult for Cualfield’s men.

The Galway manager made change after change as his side hunted blood in the season opener, and kept asking questions of the men from Tolka Park.  That being said, Shels always had the answer, and come the full-time whistle, it was abundantly clear which side would be happier with the result.