Whilst the youthful Kate Slevin converted a penalty late in the day to add a bit of drama to proceedings, it was a case of too little, too late for Galway WFC as this pre-season clash ended in defeat at the hands of Peamount United.

It was a game in which Billy Clery and co would’ve learned a lot about themselves as they went up against the best in the country, and their defending was exceptional in the first half despite conceding a late goal against Republic of Ireland international Aine O’Gorman.

Eleanor Ryan-Doyle’s side-footed finish in the 82nd minute looked to have the game wrapped up, however there was work to be done after Slevin put the minimum between the sides from the spot.

Galway kept knocking on the door in the dying echelons, however Peamount held firm for victory on the road in Terryland.

It was actually the hosts who had the first chance of the game as Chloe Singleton snuck in behind the Peamount defence.  Unfortunately, the resulting header was tame and Naoisha McAloon didn’t have to break sweat to collect the ball.

That was about as good as it got for Billy Clery’s women in Act One, who struggled to get any sort of rhythm as Peamount dominated the possession charts.  That said, the hosts defending was astute, and they made sure that chances were at a premium for their visitors.

25 minutes in, there was some panic after Eleanor Ryan-Boyle fizzed the ball along the turf to Aine O’Gorman on the right wing.  O’Gorman’s ball in was excellent, however a Claire Walsh mis-kick saw the ball turned behind.

A few minutes later, there were calls for a penalty for the Greenougue outfit after they believed the ball struck the hand of a Galway WFC’s Therese Kinnevy.  However, these calls were waved away by the man in the middle, much to the chagrin of the Peamount bench.

Eleanor Ryan-Boyce found herself one-on-one with Galway net-minder Maja Zajc only moments later, and possibly could have taken an extra touch before firing goalwards.  Her shot from just outside the box was easy for Zajc to see all the way, and she collected with consummate ease.

In games where chances are at a premium they need to be taken, and Stephanie Roche was likely cursing her luck as she just couldn’t get her right boot to a pinpoint cross from the left flank.

However, it was just before the changeover when disaster struck for the Westerners.  A scramble from a corner saw the ball fall to the feet of Peamount captain O’Gorman.  O’Gorman’s shot contained a touch of class, as she dinked the ball over both herself and the onrushing Zajc into the back of the net to break the deadlock. 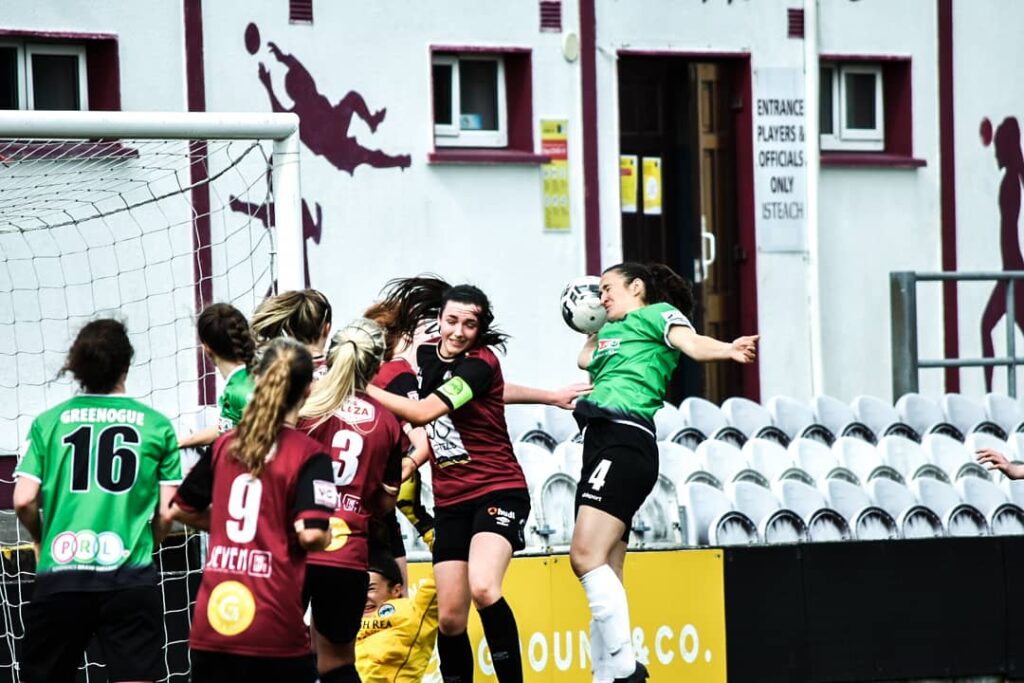 The opening exchanges of the second half were the best of the game for the home side, who pushed Peamount back for the opening ten minutes.  The hosts came out with a point to prove, immediately going about making the game more competitive, and there wasn’t much to split the sides in Act Two.

Rachel Kearns tried her luck with a speculative attempt from 25 yards out which wasn’t too far off challenging McAloon.  Another Kearns attempt mere seconds later was charged down by Claire Walsh at the back.

68 minutes in, the ball found the feet of Roche again, and whilst she got the shot off in this instance, the ball blazed over.

A few minutes after, the ball fell to Savannah McCarthy from a corner.  McCarthy’s shot was low and caused Peamount ‘keeper McAloon some issues as she was forced to get low and tip the ball around the left post.  McAloon showed courage to come out and claim the ball from the resulting corner.

In the 82nd minute, the deficit was doubled via the right boot of Eleanor Ryan-Doyle.  A precisely-placed through ball from Rebecca Watkins found Ryan-Doyle, and whilst the chance was an easy one, the striker made no mistake, slamming home to push the lead out to two.

The reigning Women’ National League champions would’ve been forgiven for thinking the game was done and dusted then, but their fans would’ve been on the edge of their seats following a costly error with five minutes to go.

Kate Slevin’s free-kick was the cause of some consternation in the box for the Peas’ rear-guard, and once the ball struck a trailing arm in the area, the referee immediately pointed to the spot.  Up stepped Slevin, last year’s Under-17 captain, who elected to go high with the penalty which rattled the net at some speed.

Galway WFC pushed hard to try and apply pressure to the Peamount defence, however their professionalism shone, and come the full-time whistle, it was a familiar feeling of victory for James O’Callaghan and his charges.