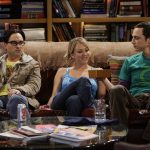 Created by Chuck Lorre and Steven Molaro, Young Sheldon premiered on RTÉ on 2 March 2018, about a week after the first episode aired on E4 on 22 February. When The Big Bang Theory reached the ominous ten-year mark in September 2017, what could be better than the release of this prequel childhood narrative of the oddest of the nerdy social misfits. Ten years is about as far … END_OF_DOCUMENT_TOKEN_TO_BE_REPLACED