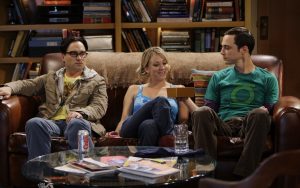 Created by Chuck Lorre and Steven Molaro, Young Sheldon premiered on RTÉ on 2 March 2018, about a week after the first episode aired on E4 on 22 February. When The Big Bang Theory reached the ominous ten-year mark in September 2017, what could be better than the release of this prequel childhood narrative of the oddest of the nerdy social misfits.

Ten years is about as far as beloved sitcoms such as Friends and Frasier lasted. Young Sheldon could be compared to spin – off prequels such as Rock and Chips which featured Young Del Boy from cult classic Only Fools and Horses in that it can stand alone as well as explore many unanswered questions from the original series.

Although it has its lighter moments, Young Sheldon is not a formulaic sitcom, filmed with a live studio audience in the way TBBT is. It’s shot in various locations as the tale of just how Sheldon became Sheldon, starting from a cross-section of his life at nine years old; starting high school as a precocious, pre-pubescent child and living with his twin sister, older brother, parents and Meemaw.

What made The Big Bang Theory so beloved was not so much the quality of its comedy as its escapism and relatability for geeks, specifically scientists and sci-fi lovers, at a time when there weren’t many of these types of shows about intelligent, grown-up, maybe sheltered adults trying to navigate social and romantic relationships.

Usually the nerd was the side character, played off for comedic effect or merely an instrument in saving the greater projects of the dominant social classes, before the revolutionary Age of Information.

It linked closely the world of advanced academia with seemingly childish recreational pursuits such as comic books, card, board and video games.

Young Sheldon additionally follows the sentiment of nostalgia portrayed in shows like The Goldbergs which restage a lost generation from a modern standpoint, complete with numbers like ‘The Walk of Life’ by Dire Straits or ‘Faith’ by George Michael.

Executive Producer Jim Parsons’ own voice-over helps ground us back to the present with the older Sheldon’s own reminiscent commentary. We see the beginning of his interactions with the world around him, his many quirks as they start to develop and his reasoning behind them.

Of course, there’s references a-plenty; Easter Eggs from the mother show but also physics, religion and maths. Whereas in The Big Bang Theory, much of the primary focus is on Penny and Leonard’s relationship, Sheldon now gets a series all of his own, a chance to come to the fore and explain himself from a time of relative innocence, before he became so cynical and irritating.

It’s still a little jarring when we hear him spout mature facts and information before his time. The library scene where he learns how to make friends by reading a self-help for adults can be contrasted to the scenario where grown-up Sheldon tries to find the same formula – by reading an illustrated picture book for children.

The same allusions to apes are made; the people who are ordinary in comparison, like domesticated but skittish cattle. The established opening sequence is of a Texan cow approaching the child prodigy (Iain Armitage) who tries to back off.

It’s interesting to see his early experiences with faith. At first he neither dismisses nor upholds the validity of religious belief, for example in the existence of God.

Overall, this series can be viewed as a much – needed filler, albeit with child actors, particularly for those who thought The Big Bang Theory was getting stale. It’s set for a second season, looks a treat and, while not entirely family-friendly, will probably have a thing or two to make your parents murmur in appreciation.