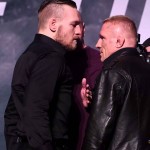 Conor McGregor goes into his first fight of 2015 knowing that victory will secure him a shot at the UFC Featherweight Champion, Jose Aldo. The Boston crowd is hardly expected to be partisan as the Irishman looks to defeat Denis Siver on his path to UFC gold. On the face of things, there looks like there can only be one result this Sunday. If the promos are anything to go by … END_OF_DOCUMENT_TOKEN_TO_BE_REPLACED