Conor McGregor goes into his first fight of 2015 knowing that victory will secure him a shot at the UFC Featherweight Champion, Jose Aldo. The Boston crowd is hardly expected to be partisan as the Irishman looks to defeat Denis Siver on his path to UFC gold. On the face of things, there looks like there can only be one result this Sunday.

If the promos are anything to go by the UFC have every bit of faith in Conor to march on from this fight.

Siver has had a chequered past with the organisation. He has faced suspensions for failed drug tests and he is, at this stage, in the twilight of his career. He’s a machine, bulky, small and preposterously muscular, but nonetheless a 36 year old man, facing a man 10 years his junior. McGregor is hungry in the ways a jaded mid-thirties man can simply never be. McGregor is already looking past this fight. His eyes are fixed on a potential title match next summer in his home town Dublin. This, however, is not a foregone conclusion, not yet. 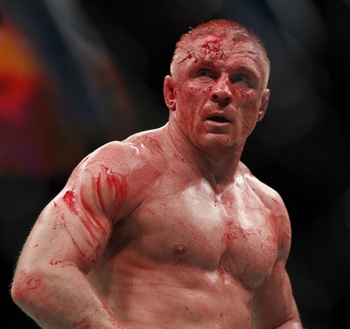 Siver may be an aging striker, but he’s strong and fairly adept in the ways of submission. McGregor’s two career losses came from submissions and we’ve seen very little ground or grappling from the charismatic Irishman. This is a potential chink in McGregor’s armour. Conversely, this Sunday, he’s facing a man with very minimal stopping power, boasting a fairly poor record for knockouts, something completely at odds with McGregor’s stats. Conor boasts 16 wins, 14 of them being knockouts; his record speaks for itself.

“I am looking forward to victory… I will beat Dennis, I will retire Dennis”. He’s gone on record saying that he will knock Siver out in under two minutes.

While quite a bold claim, you don’t doubt his ability to do so. This will come down to whether Siver can do his utmost to control the fight and take it to the ground. The odds are stacked against the aging German.

Realistically, Siver is probably just too one dimensional. He hasn’t recorded a decisive TKO finish in nearly five years. Coupling this with the fact McGregor has too much at stake to possibly slip up here. This is his time. This is, as the promos have screamed, “the McGregor era”.

Whether you love him or hate, McGregor’s calibre is simply undeniable. Everything has been laid out for him. Beat the German and he has his title shot. The time for talking is done!