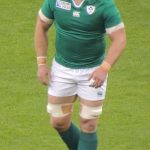 By Owen Kennedy It was announced on 8 February that Irish flanker Seán O'Brien signed a three-year contract with London Irish, reported to be worth €420,000 per annum. The Tullow Tank will be leaving Leinster after this year’s World Cup. After his signing, O'Brien said: “This is one of the hardest decisions that I have ever had to make. I have played all my rugby in … END_OF_DOCUMENT_TOKEN_TO_BE_REPLACED