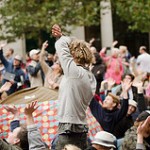 Roughly 10,000 students were on the streets of London 19 November to protest against cripplingly-high university fees and to demand free education. The march, organised by various groups including the National Campaign Against Fees and Cuts, the Student Assembly Against Austerity and the Young Greens, began outside the University of London, and then made its way through the … END_OF_DOCUMENT_TOKEN_TO_BE_REPLACED

By Caroline Spencer 2021 YouTube was not made with me in mind, and rightly … END_OF_DOCUMENT_TOKEN_TO_BE_REPLACED