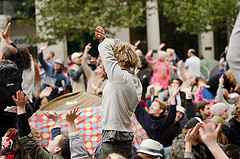 Roughly 10,000 students were on the streets of London 19 November to protest against cripplingly-high university fees and to demand free education. The march, organised by various groups including the National Campaign Against Fees and Cuts, the Student Assembly Against Austerity and the Young Greens, began outside the University of London, and then made its way through the city.

As the march reached the House of Parliament, the intensity increased and the demonstrators occupied Parliament Square. Riot police were then deployed in the area, and tensions flared. There were numerous scuffles between police and protesters, and police were accused of aggression and unnecessary violence by the protesters, with one seemingly unprovoked arrest sparking particular anger. A man was bundled to the ground by three officers, with a witness saying: “He was just walking outside John Lewis and they attacked him […] He hadn’t done anything at all. We are all just here to protest. It was really violent: he looked like he was unconscious for a while”. Protesters then paint-bombed several locations around the city, including the Department of Business, Innovation and Skills and branches of McDonalds and Starbucks. Four arrests were made during the demonstrations, according to the Metropolitan police.

The UK’s Conservative-Liberal Democrat coalition government hiked university fees in 2010, meaning that students now pay up to £9,000 a year in tuition fees. That raise resulted in furious student protests and contributed to the enormous decline in popularity of the Liberal Democrats, who are now predicted to become the UK’s sixth party in next year’s elections, dropping behind UKIP, the Greens and the Scottish National Party. Lib Dem leader Nick Clegg had previously promised to abolish tuition fees altogether if his party was elected to government.  This week’s demonstrations were the largest since the initial protests following the fees increase.

A notable aspect of the demonstrations is the fact that large numbers attended in defiance of the English National Union Of Students (NUS), who withdrew their support from the demonstrations shortly before they started, citing an “unacceptable level of risk” to its members. This outraged many of the protesters, especially as the Scottish branch of NUS were happy to attend for an issue that did not even directly affect them. “We do know students are very angry about being let down by the NUS […] When you see the numbers here today they are in danger of becoming an irrelevance” said Beth Redmond from the National Campaign Against Fees and Cuts. She later told Vice:  “I would stick my middle finger up at them [if they showed up]. They’ve undermined us and tried to stop us organising this, and look how many people just don’t care about them. It’s a big ‘f*** you’”.  For many, the withdrawal only confirmed their perception of the NUS as a practice club for wannabe politicians, rather than a genuine representative voice for students. This anger against the NUS was confirmed when their London HQ was paint-bombed and graffiti. A group named Students Against Boredom and Banality claimed responsibility for the graffiti, and in a statement wrote: “the ship is sinking, yet the idiots at the NUS are content to rearrange the deck chairs […] it has always remained clear that they are far more serious about their careers in the Labour party than free education”.

At the moment, students and politicians are failing to find much common ground on the issue of university fees. The Green party are the only major UK party pledging to abolish fees, and they are unlikely to form part of any new government after the general election in 2015. Labour’s proposal, to reduce fees to around £6,000 pounds a year, has failed to garner much enthusiasm from students. It seems like protests like this are set to continue.