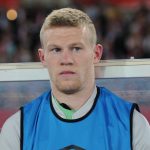 By Patrick Henry November has come around and Poppy season is in full flow in British football which can only mean one thing. The vilification of Irish Catholics, in the stands, in the dugouts and on the pitch. Jerseys become emblazoned with a red poppy to commemorate British military personnel who lost their lives in conflicts since World War One, raising money for the … END_OF_DOCUMENT_TOKEN_TO_BE_REPLACED