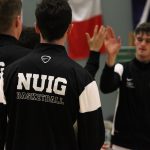 It was jubilation for the NUI Galway Men’s Basketball team on 14 March as they emerged victorious in their All-Ireland final clash with Ulster University Jordanstown to win the NBCC Men’s Division One League. The Corribside team clinched the title by 79 points to 62. Captain Patrick Lyons was named MVP on the day. NUI Galway had run out 14-point winners over Griffith … END_OF_DOCUMENT_TOKEN_TO_BE_REPLACED