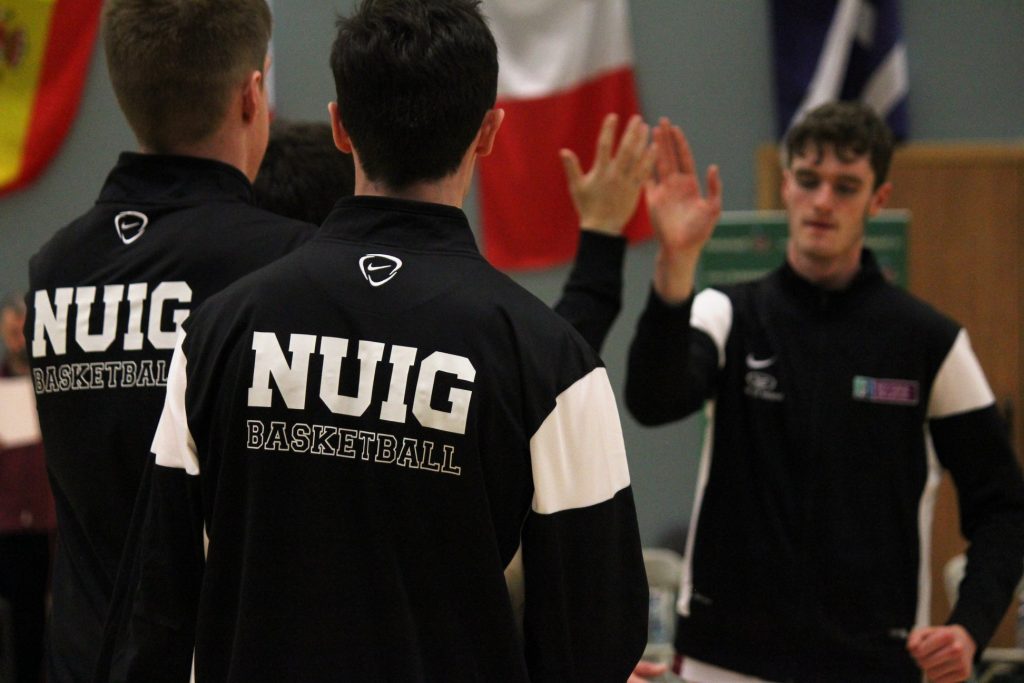 It was jubilation for the NUI Galway Men’s Basketball team on 14 March as they emerged victorious in their All-Ireland final clash with Ulster University Jordanstown to win the NBCC Men’s Division One League.

The Corribside team clinched the title by 79 points to 62. Captain Patrick Lyons was named MVP on the day.

NUI Galway had run out 14-point winners over Griffith College Dublin in what was a high scoring All-Ireland semi-final in the Kingfisher on March 8.

These two sides were involved in a thrilling league final last year which NUI Galway edged 79 – 77. This time around however it was a much more one-sided affair as the defending champions, led by Eoin Rockall who scored a game high 36 points, convincingly prevailed.

Unlike the rest of the game the first quarter was surprisingly low scoring.

Griffith College got off to the better start with Conroy Baltimore proving to be a forceful presence in the paint, although the visitors were still struggling with their shooting.

The home side were also having difficulties but after lights out shooter Eoin Rockall hit back to back threes, they grew into the game.

After a first period which left the match tied at 10 – 10, the game erupted from an offensive point of view. The perimeter shooting from both sides was especially impressive as they combined to score nine threes in the second quarter alone.

Rockall, who would have nine threes on his own by the end match, added three of NUI Galway’s five in the period with captain Patrick Lyons and Thomas Mikkus adding the others.

On the other side of the court, shooting guard Charlie Coombes hit three threes himself as he notched up 11 second quarter points after going scoreless in the first. Griffith College were also still a threat inside as Baltimore was able to consistently find his way to the basket at the low post.

NUI Galway held a slim four point lead at the midway point with the score 38 – 34, but in the third quarter the Charlie Crowley and Tiernan Dempsey coached outfit pulled away.

Rockall again was at the heart of the Corribsiders surge as Kenny Hansberry and Keegan Ryan also got pivotal baskets from within the paint.

Griffith College had seven players in their squad and offered little resistance. Only Oisin Kerlin and the consistently dangerous Baltimore were a threat offensively in the third quarter.

It was clear there was no way back for the visitors and with 6:40 left to play the men in maroon had a comfortable 20 point cushion.

Another sign that the white flag was raised was when Griffith College coach Dave Baker withdrew arguably his two best players (Coombes and Baltimore) midway through the fourth quarter, looking ahead to the final round of Super League fixtures that took place the following weekend.