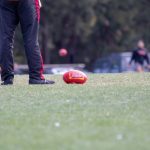 By Darren Casserly Former GAA player Tomás Ó Sé recently called into question the practice of Aussie Rules teams taking Gaelic Footballers from their clubs without compensation. He suggested that Aussie Rules teams should pay a fee to take Irish players from their club. The question that would need to be asked is where will the money go, since GAA is an amateur sport? … END_OF_DOCUMENT_TOKEN_TO_BE_REPLACED