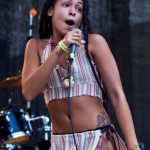 By Sarah Gill On Thursday 17 January, Ariana Grande released her latest pop anthem ‘7 Rings’ with a R’n’B edge. The singer described the song as “like… a flex”, revolving around retail therapy, friendship and getting yourself what you want. In typical Ariana Grande fashion, the tune is a female anthem. Following its initial release, the braggadocious song … END_OF_DOCUMENT_TOKEN_TO_BE_REPLACED