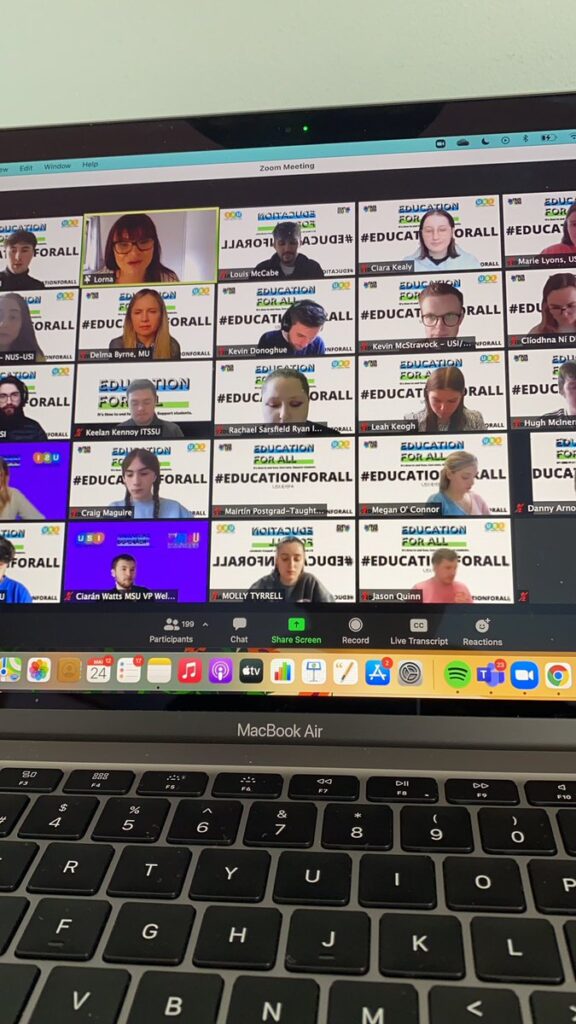 When I think of the young people paying the highest fees in Europe for third-level education, my mind immediately thinks of places of grandeur; historic and well-funded, world renowned, prestigious, and sought after Universities. I think of places that bolster state-of-the-art facilities, neatly primed gardens and communal spaces, sublime accommodation, sophisticated and modern.

I do not think of Universities that are under-funded, out of date, ill–equipped, and lacking the capacity to even begin to accommodate the student body they flout for cash each academic year. At the very least, I do not think of a Government that supports and perpetuates this unsustainable system, which disadvantages and imposes economic barriers against a massive cohort of the demographic the Government is supposed to support.

Unfortunately, the latter is the reality for more than two-hundred-and-fifty-thousand University students in Ireland who have been fighting for change for over a decade now. The downfall in government spending on higher education has been acutely observed and protested against by many, including the Union of Students in Ireland.

It was a success for Ireland’s young people when third–level education fees were abolished in 1996. Still, poor leadership and decision making in Governments since have seen Ireland go from being a global leader looking towards future innovation through education funding to the most expensive, unsustainable and probably most under-funded education system in all of Europe.

Documents proposed by the Union of Student’s Ireland show that funding for Higher-Level education was cut by 35% in 2008, with the student contribution fee increased by 363% between 2007 and 2014. This is a stain of the economic crisis that shook the Irish nation. Although I was only nine years old in 2008, I still recall the public fall out and dislike of Brian Cowen in his time as Taoiseach, who was a Fianna Fáil leader, of course. It all makes sense now.

The reality is that the situation facing Ireland’s young people is nothing current or previous Governments don’t already know about. For years now, Governments have been strongly versed in the fact that the current system is unsustainable. As recent as 2019, the Director of Governance and Funding at the European Universities Association (EUA), Thomas Estermann, warned that “after almost a decade of cuts, the long-term sustainability of the higher education system in Ireland remains an issue.” Mr Estermann classified the current system of higher education funding as a “danger.”

The Union of Students in Ireland has been fighting an uphill battle since their foundation in 1959, amplifying our voices as the sole national representatives of third-level students in Ireland. With every setback, they push harder to achieve a milestone, and they come back stronger again and again.

We owe it to the USI for their determination, resilience and refusal to let-up the pressure against the steady stream of incompetent Governments, all of which uprooted any remanence of moral value or etiquette in selling the false image of an open and accessible education system.

From the very beginning of the movements and campaigns brought by the Union of Students in Ireland, their message has been very clear – Education is a right, not a privilege. Therefore, it should be publicly funded and available to all.

With the rising cost of living, rent inflation, a pandemic, graduate job insecurity and researchers warning about the dangers and unsustainability of the current state of higher–level education in Ireland – this message has substance now more than ever.

We must demand Education For All.

In light of this, the 24th of March 2021 was the Union of Students in Ireland Day of Acton in relaunching the ‘Education For All’ campaign. Due to current circumstances, we couldn’t flood the streets of the capital like students before us did on many occasions throughout the last decade. Still, instead, the USI hosted a Virtual Protest in order to protect public health.

Regardless, the turnout was phenomenal, with Students’ Unions from Universities and Institutes of Technologies across the country, and students alike, showing up in support of the campaign.

Many speakers highlighted different aspects of the campaign and spoke on various goals the Union intended to achieve and implement. They supplied statistics and concise information about the inevitable crisis facing students and the wider economy if the current system fails to change.

The USI representatives such as Craig McHugh and Marie Lyons spoke about how every euro invested in higher education here in Ireland translates to a four euro return in the economy. They also pointed out that the entire ‘student experience’ Universities sell to young people, and especially to International students in order to generate more revenue, has been completely turned on its head this year in light of the pandemic.

The USI also pointed out that although the campaign’s overall goal is to remove the barriers to education and develop a publicly-funded system, this year, more than any other, there was no justification for the 3,000 euro student fee when learning was conducted remotely and online.

Overall, the USI Virtual Protest platformed many brilliant and well-informed speakers to talk on various issues, but most significantly highlighted the problems while delivering achievable resolutions that the Government can adopt. They also inspired all of the students who were in attendance to act together and make our voices known, which we did at the time by getting the hashtag ‘#EducationForAll’ trending on Twitter.

On being active for education reform with the USI, the President of NUI Galway Students’ Union, Pádraic Toomey said;

“Earlier that day, I and officers around the country rang TDs from all corners of the island and urged them to sign the pledge and support the Education For all campaign. We are hoping this means they will support upcoming bills and finally reduce the cost that students and families have to pay to get an education.”

The reality is that now is the time we need to generate the conversation about our education. Take hold of the narrative, fight back and be loud. This starts with student engagement in politics and the various issues that the USI have highlighted.

Truth be told, the day after the USI Virtual Protest, the coalition Government and the Minister for Higher Education, Simon Harris, voted down a bill that would have eradicated many of the financial barriers we are facing at the moment. Throughout this pandemic, the current Government have made their considerations about third–level students very well known, and this latest move has been a testament to the little regard they have for us.

On that note, I say this is not good enough. Students deserve better, and in the words of previous President of the Union of Students in Ireland, Annie Hoey, “We can’t have a Government that stands up in the Dáil and proudly declares to the world that multinationals come here for our educated workforce and then have the God-damn audacity not to invest in that educated workforce.”

For more information and to get involved in reforming the Irish third-level education system, go to www.usi.ie/EFA