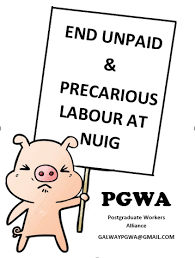 At the beginning of the 20/21 academic year, Postgrad Research Students at NUI Galway formed the Postgraduate Workers Alliance NUIG in response to the exploitative guidelines set out in the NUI Galway Guidelines for Research Degree Programmes. These guidelines require postgraduate research students to undertake 120 hours of unpaid teaching work per year for three academic years.

Postgraduate Workers Alliance NUIG sent a letter to NUI Galway President, Ciarán Ó hÓgartaigh, the Minister for Higher Education Simon Harris and Michael D. Higgins, the President of Ireland, stating that the conditions of the guidelines are “exploitative and unjust.”

In light of this, Postgraduate Workers Alliance NUIG stated that “we have no option but to make it clear that we do not recognise any expectation of unpaid work as legitimate.” Further adding, “We hereby declare our intention to refuse to carry out any work which is not remunerated at the existing collectively bargained rate.”

At the time, the group got media attention and support from NUI Galway Students’ Union, but we have to ask ourselves; what has happened since? Are Postgrad research students being supported?

“Nothing has changed; all of the same problems still exist. The one thing the university has done in terms of negotiating things was to set up a working group led by the Dean of Graduate Studies, with representation from the Students’ Union through the Postgrad Research officer. Apart from that, the other group members are made up of staff from all of the colleges in the University.”

Although things seemed hopeful with the establishment of a working group, this was not the case; as Seb explained,

“The first step of this working group was to collect data within the University in order to see the scope of the problem, so to see how many students are working without pay and how many hours they are having to work without pay. We would then compare it to other Universities in Ireland and potentially to those in Europe to benchmark where NUI Galway stands compared to everyone else. Yet, this alone has not been achieved.”

“This (working group) was set up roughly six months ago at this point, and the longer it goes, the more it seems like a stalling tactic.”

Despite submitting several FOI (Freedom of Information) requests to determine the extent of the problem, to both the University and the individual Schools and Departments, they all responded stating that the “data did not exist” according to Seb, to which he added, “So they are just not keeping track of the scale of this at all.”

Seb added that for his Sociology and Politics course, his entire class signed a letter and submitted it to the University, stating that they will not be doing the work unless they were going to be paid. In that singular case, they were successful.

Seb also revealed that postgraduate students in the Mathematics department who tried to do the same and managed to negotiate their unpaid working hours to be reduced from 120 hours to 60 hours.

However, he pointed out the many ways in which this is flawed.

“There is barely any support made available for students to learn how to teach, and another thing that makes us question their argument is that the University ends up relying on unpaid teaching through the Postgrad research students; they wouldn’t be able to deliver as many classes if it wasn’t for PhD students actually doing the teaching.

On this, he added,

“They may well be using the argument that the unpaid work is for our own good because we’re learning, but at the same time, they are definitely benefitting from that process as well.”

With regards to the stipend and the scholarships offered by the University, Bierema added,

“The amounts offered by these scholarships have not increased since they were set up more than a decade ago, and obviously, in the meantime, the cost of living in Galway has gone through the roof. So, now, we have a whole bunch of students spending half of their stipend on rent. Many are struggling to get by so often they need part-time jobs so that they can afford to keep studying, and on top of all of that are still expected to do unpaid teaching work.”

The Students’ Union Officer criticised the “insane” workload that is placed upon PhD students and  said  that conditions faced by Postdoctoral students are setting them up for failure;

“The sheer amount of pressure on PhD students due to this entire workload is insane. The data showing the number of students dropping out before completing their research is on the increase. Considering we are in the middle of a pandemic; research is really difficult. We don’t have access to the college or to the spaces where we’re carrying out our research, and then you add the financial pressure on top of this – so mental health-wise, it’s almost as though we’ve been set up to fail.”