A notice of referendum has been put forward by the NUI Galway Students’ Union aimed at reforming the student levy.

The announcement was made on Wednesday March 29th, and requires 500 signatures to be put to the student body as a referendum. SIN understands that the proposed referendum would take place on April 22nd in conjunction with the Students’ Union Full-Time Officer elections.

The €224 student levy has been at the heart of many heated debates in NUI Galway over the past fourteen years. 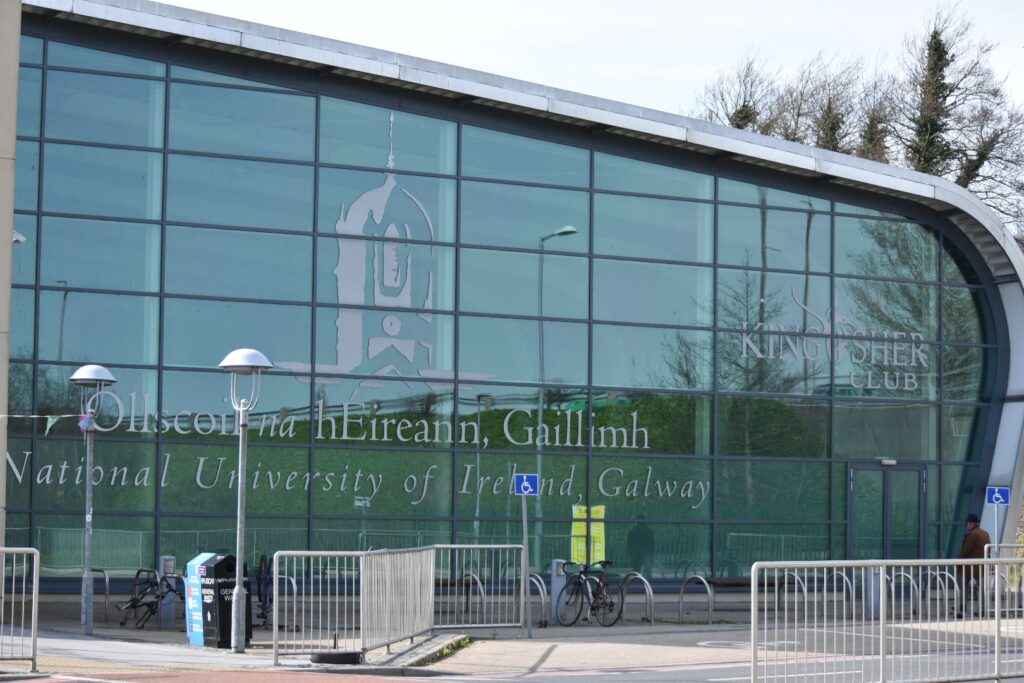 referendum to contribute to the building of a new Sports Centre on campus, which later became known as The Kingfisher.

By extension, the Sports Centre, which officially opened its doors in 2008 has also been scrutinised- as the money borrowed to build the facility is still currently being paid back by students through the student levy, almost 14 years after its establishment.

When the Sports Centre was planned in the early 2000s, it was to be one aspect of a trust called ‘The Infrastructural Development Fund’ which would cost the University €40,000,000.

These projects included the construction of the new Sports Centre, as well as the renovations and refurbishment to the old Sports Centre on campus, which was to become a cultural centre known as Áras na Mac Léinn.

There was also a series of smaller projects included within the fund to improve basic Infrastructure on campus which included facilities such as parking, roads, site works and acquisitions, as well as other projects like the University Park and Ride scheme.

This would lead to a total investment of €23,193,000 from the University and other non-student contributors.

The €100 sports centre charge included within the Student Levy was to account for the other €17,000,000 within the original budget outline for the Sports Centre.

This was borrowed internally by the University Management Team in NUI Galway, as the money could not be fronted by the Students’ Union at the time.

According to figures shared with the Students’ Union in 2014, however, the Sports Centre accounts state that the cost of the Kingfisher was €21,930,000, with funding of €6,000,700 made up of contributions by the University and the University Foundation.

In a statement to SIN, the University Management Team claimed that they raised €9,600,000 through the Galway University Foundation, an increase of €3,500,000 on what they had initially set out in the 2014 budget.

The Sports Centre had been in operation for six years up until this point, and the Students’ Union maintains that the construction cost funding should have been finalised.

This report also states that the purpose of the levy was to create a stable flow of money for the sports centre project.

“The levy was budgeted initially to create a cash inflow of €1,250,000 per annum, over an eighteen-year period, from which was to be deducted a notional interest charge to reflect the University’s payment of the construction and other costs in advance of the levy collection period,” the report states.

“The students’ support for the venture and their willingness to demonstrate this support though a levy agreed by referendum gave a strong incentive for the University to ensure the delivery of the project.”

This resulted in a much larger deficit of €17,490,000 to be paid from the student levy, which is closer to the original budget outline from 2003.

The Student’s Union received an explanation from the University regarding the reconciliation in October 2018, which stated that, “these represent the reversal of previous entries funding the Sports Centre from the University Income and Expenditure account.”

“The original plan to fund the Sports Centre did not envisage any financing directly from the Income and Expenditure Account, and the two entries referenced above should never have been posted to the Sports Centre account in 2008/2009 and 2009/2010. The removal of the monies was simply correcting a posting made in error.”

The Students’ Union claim that this amendment of an error made ten years after the error occurred “added an additional €1,827,000 to the Sports Centre deficit,” which students were expected to pay from the levy.

The Union also states that, “it’s unclear how the costs reported in the Infrastructural Development Programme Updates presented to FRC did not account for such an outcome.”

In documents seen by SIN, it can be revealed that the University in fact collected €20,800,000 from the levy in the past 14 years.

This has raised questions as to why the €100 sports centre charge is still in place if the payments were running more than €1,400,000 per annum, as the €17,000,000 contribution from students would have been raised at a faster pace than the 18-year period originally set out.

According to the UMT, the €40,000,000 budget was “fully utilised when the infrastructure programme was subdivided into a number of smaller projects.”

They also state that the notional 5% interest rate which was added onto the loan was “the market rate for the cost of borrowing money in 2008.”

Under documents released to SIN through the Freedom of Information Act, there is currently €5,490,581 (inclusive of 20/21 levy) left to be paid on the debt incurred by the construction of the Sports Centre in NUI Galway.

The amount of interest paid on the loan from the Student Levy to date is €6,670,799 (inclusive of 20/21 interest), and it is estimated by the University that all outstanding liabilities left to be paid on the constructions will be completely discharged by 2023.

The UMT states that the Union has been kept regularly updated on the arrangement, saying:

“As a member of the University’s Finance Resource Committee, the Students’ Union has had oversight of every aspect of this arrangement.

“Since the Sports Centre was opened in 2009, the Students’ Union have received annual statements from the University stating the exact amount paid to date, the interest paid to date and the balance outstanding. The construction commenced in 2007, but the last levy payments are not due until 2023.”

However, Students’ Union President Pádraic Toomey has disputed this claim, stating that there is only one student representative on the University’s FRC, and that the interest rate was never agreed upon.

“The University Management claimed that the 5% interest rate was agreed upon because an SU President was at a meeting where the 5% was alluded to,” he told SIN.

“They have this idea that there is an “implied contract” just because an SU President was present and there at the time. However that’s not how contracts work- you can’t imply a contract. They are maintaining that millions more are owed because of an implied contract, because somebody was sitting in on the meeting where it was mentioned.

“At one point they had in their emails that they were contributing money towards the project, and then suddenly they weren’t anymore. This moved the final payment date to almost ten years longer than what it was supposed to be. They called it an accounting error- and there are a lot of these things that would make you think, “How did they let this happen?”

“Then you’d wonder if they did it so that they could make sure they could charge the students the full whack of €224 every year,” he said.

The University Management Team says that if a referendum to reduce the levy is passed, it would leave the college in a “very difficult situation”.

“Ultimately the University will seek reductions in expenditure to compensate for the three years of levy income outstanding, which has the potential to impact on other student activities, in addition to the proposed cuts to the student project fund. This would impact initiatives that are popular with our student body, such as the Seas Suas training programme, Active Consent, and sustainability projects.”

However, Toomey says that the new levy will contribute more money to student activities, contrary to the University’s claims.

“Even though the University is threatening to take away funding from some other aspects of life on campus, we’re actually going to be giving more money to the things students care about by reducing the levy.

The Students’ Union President states that the Sports Centre is a revenue generator for the University, and that it produces a guaranteed annual return in the form of licence fees from the operator.

“It is a building that adds value to the college, that attracts students to the University. It’s a building the University is going to own forever, and it’s worrying that they are talking about opportunity costs and not the welfare of students,” he continues.

“The building is still going to be here when the levy is paid off, and it is a building that earns them a lot of money.”

The UMT argue that the philosophy of the Sports Centre has “been to provide NUI Galway’s students with the best value available.”

“The student body was strongly represented on the tender evaluation committee, including the President of the Students’ Union and the Clubs’ Captain. They made an important contribution to analysing the competing tenders and ultimately to the selection of the successful candidate.”

Speaking about the referendum, and why it is being proposed now, two years before the 2023 cut off date for the Sports Centre charge, Toomey states that “just because it’s going to be paid off in three years’ time does not mean that students who might only have three years in NUI Galway should pay for a building they did not agree upon.”

“We should not be paying an interest rate on a building that the University owns, and is going to own forever, and has very little cost on. They raised a lot of money through philanthropic means to build the Centre. They got a free building, all they had to do was front the money for it in the first place.

“We shouldn’t sit and say “Oh sure it’ll be paid off in a few years, it’ll be grand,” when it’s a building that students are paying a lot of money towards, and they don’t even have free access to.

“At the end of the day, students still pay a lot of money to use the gym too. The building has been here too long for us to have that attitude.”

“What we are seeing here is NUIG in a new light, where they very much are all about the money and not about the welfare of the students. It comes back once again to the language used- and the talk about “opportunity costs”.

“Why do we need the levy, really?  If the University had the money that they borrowed off themselves in the first place, why did students need to pay for it?

“It’s like they just decided to build the building and looked at how they could charge students the most for it. It’s just very backwards,” he finished.