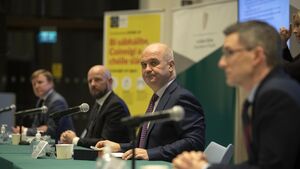 This government managed to put us in level five less than a month after they took us out of it, which has been disastrous for people’s mental health and the economy, but ever since Christmas Eve they have been very unclear and they have managed to confuse the entire population as to when we can start going back to some sort of normality.

Ireland was meant to be in level two from the 18th of December until the 3rd of January, and then it was looking like we would be in level three for a while, although we were instantly put into a harsh lockdown from Christmas Eve onwards for obvious reasons, however we had very little warning from the government or even clarity as to when it would be lifted, although very few people would have thought we would be in level five after the 5th of March. When we were told the 5th of March in January it really shattered people, not only because of its time length but also because we knew it would only be level three or four after a long level five.

In this month the government were exceptionally unclear as to whether we will be out of level five, as well as being unclear on whether schools and construction could properly reopen. Last week it was announced by the newspapers that the government would be extending level five until the end of April, although Micheál Martin had said we would be in a severe lockdown till the end of April, which gave people hope that we may go into level four instead, which still is definitely a severe and harsh lockdown, although not as harsh as level five.

Leo Varadkar had also said that a severe lockdown does not mean a level five lockdown, which in some way lifted peoples hopes up, and gave people optimism that we would be in level four by the 5th of March. We are then told on the 23rd of February that level five will be extended until after Easter. It also took a very long time for the government to properly speak up about when the restrictions will be eased, and this also made people that bit more confused. This shows a lack of clarity and unprofessionalism from the government.

The lack of clarity and unprofessionalism this government has had about this lockdown is incredible and it really shows how disengaged and out of touch the government is from the lives of ordinary people affected by this harsh lockdown, in particular young people. It shows how unwilling the government are to ease restrictions to make ordinary people’s lives easier, and the extension to level five is unnecessarily harsh. The government should have eased the 5-kilometre travel ban, they should have allowed controlled outdoor gatherings, as well as allowing driving lessons to go ahead and even controlled outdoor dining in pubs and restaurants.

None of these would have caused a huge increase in coronavirus cases, and these would all be allowed in level four. Even though level four is still quite a harsh lockdown as no visitors are allowed and retail, gyms, hotels and barbers would still all be closed, a slight easing of restrictions would have done many people the world of good who are struggling in this lockdown, as well as being able to minimise the coronavirus. We need our government to listen to all its people and not just listen to what NPHET call for.