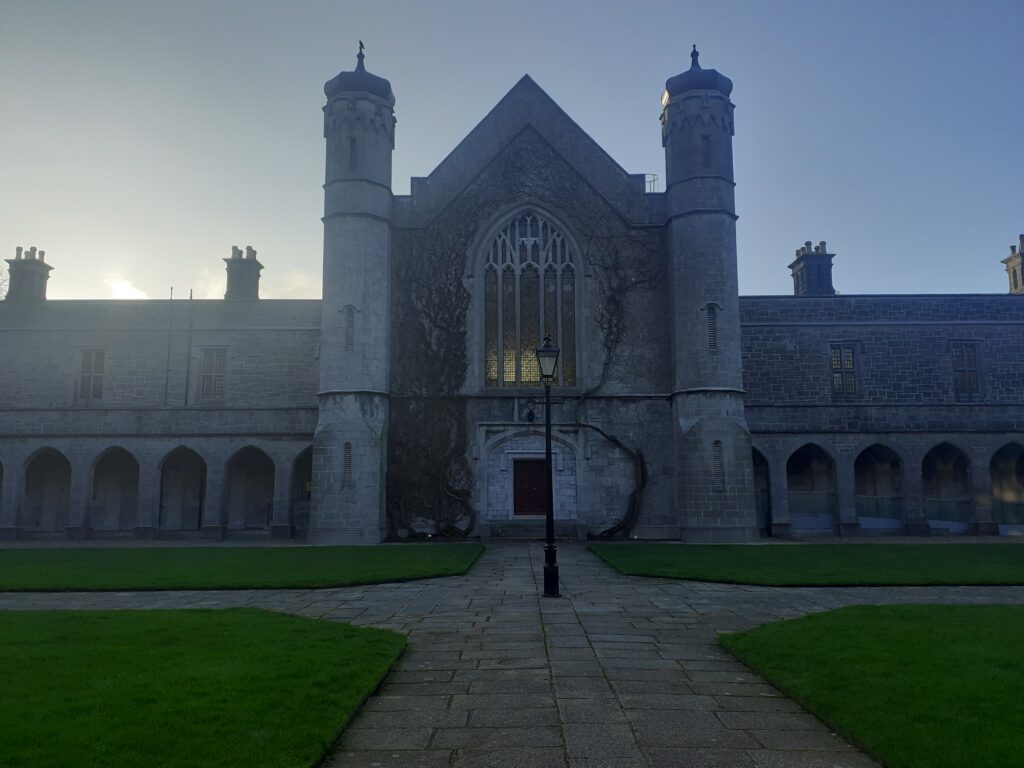 Students at NUI Galway have been warned about their conduct on social media by the university.
The warnings came following an online meeting of the Students’ Union Council on Monday, 22nd of February, where the conduct of some participants sparked concern among many of those in attendance.

SU Council is made up of elected class representatives, but students are also entitled to attend. Simeon Burke, an attendee at the meeting, repeatedly interrupted council proceedings, questioning whether the SU Executive supported fining students who were found to have breached Covid-19 guidelines.

His conduct led to exasperation among members, who expressed their displeasure at Burke’s conduct. This led Burke to demand an apology
through the Chairperson on several occasions.

This demand went unfulfilled. Following this, the Chairperson muted Mr. Burke, who then protested through the display of a handwritten sign which read “Student Sworn At No Apology.”

Doctored images of Burke holding the sign circulated on social media, many of which reflected adversely on views he holds which are perceived to be right wing. In the days that followed the council sitting, upon becoming aware of the social media postings,

Dean of Students, Prof. Michelle Millar contacted students who might have been perceived to be in breach of the code. Prof. Millar instructed that
the offending tweets be deleted, and reminded the students in question of their responsibilities, stating that the use of “disparaging” language “may damage the reputation of NUI Galway and the named person(s).”

SIN approached Prof. Millar for comment and has not received a response at the time of publication.

At least one student refused to delete his tweet, instead posting another meme on Twitter relating to Burke. The meme was accompanied alongside screenshot of an email from Prof. Millar with the hashtag #FreeCian which then trended nationally on Twitter.

The tweet also claimed that because the user’s tweets were published on his personal social media account, then no rules had been broken.
NUI Galway’s social media guidelines state that, “The University is conscious of the fact that a lot of the content on social media sites is user-generated, and thus, may pose legal and reputational risks for NUI Galway if such content is inappropriate or illegal. It is therefore important and expected that all employees and students follow the same behavioural standards online as they would in real life.”

These behavioural standards are asserted as being in accordance with the University’s ethos and Code of Conduct.

The University’s social media policy also states that social media usage must also be in read in
conjunction with the Staff and Students Codes of Conduct, the Social Media Guidelines (Marketing & Communications Office), and the University Data Protection Policies and Procedures.

It is further provided in NUI Galway social media guidelines that “Social media should not be used to breach the data protection rights of other individuals, to post material that would reasonably be deemed inappropriate, obscene, discriminatory, threatening, defamatory or slanderous towards
any individual or entity,”

“It should also not be used to bully, harass or intimidate members, to express support for illegal activities or organisations, to promote or advertise a commercial product or solicit business or membership or financial or other support in any business, group or organisation except those which are officially approved by the University and to post content that could pose a security risk for NUI Galway or its members.”

It notes that students must always be respectful and express good judgement and common sense when posting online. It also says students should strive for accuracy, ensuring that anything they write is not defamatory. The policy also warns that posting online can lead to debate from those who hold opposing views.

Students are also warned not to post or share information which is confidential or proprietary
to the University.

“Care should be taken to use good ethical judgement and to ensure that all University privacy and confidentiality policies are adhered to. Those who fail to do so risk disciplinary action, up to and
including dismissal,” the policy finishes.

In an email to the University community, President of NUI Galway, Professor Ciarán Ó hOgartaigh stated, “We do not routinely monitor social media
interactions of our community and are therefore normally reliant on inappropriate content or suspected breaches of our social media policy being brought to our attention… as and when appropriate under our policies, we must and will follow up on all such reports without fear or favour.”

In response to the University’s reproaches, students complained online about the conduct of some others in attendance at council. In an email sent to The Dean of Students, which was seen by SIN, one student claimed that another student had “continuously ignored the rules of the Comhairle in regard to speaking time, addressing another speaker, agendas and general etiquette and basic
decency.”

Simeon Burke ran for the role of Vice-President/ Welfare and Equality Officer in 2020 and campaigned heavily on a platform which promoted free speech and the “welfare of the many, not the few”.

During his campaign, Burke stated that: “Students across campus are telling me that you are only welcome in our Students’ Union if you are 110% committed to the promotion of LGBT,” and he pledged to be a representative for all students irrespective of “your belief, your race, your colour,
or your gender.”

Furthermore, after campaign posters of his were allegedly taken down and burned, Burke posted a video drawing comparisons between the behaviour of the Ku Klux Klan and those who allegedly destroyed the posters.

In a statement released on the 2nd of March, Burke alleged that members of the Students’ Union Executive Committee worked to exclude him from
council proceedings, and that he was “targeted by an abusive and hate-filled online campaign.”

SIN reached out to both Deputy Murphy and MEP Flanagan but did not receive a response at
the time of publication.

In his statement Burke claimed that he had taken his complaints to An Garda Síochána and SIN understands that an investigation is ongoing.