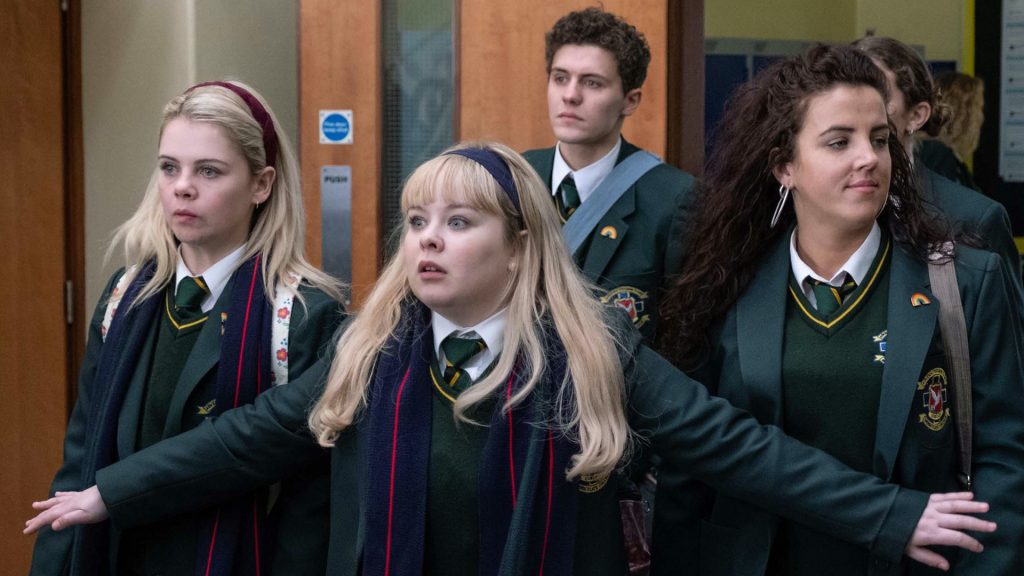 It’s difficult to imagine anybody but the current cast of Channel 4’s hit comedy Derry Girls playing all of our favourite characters, but Clare Devlin as we know her may never have seen the light of day if it wasn’t for one tweet, according to the actor who plays her, Oranmore native Nicola Coughlan.

“I think I was on a bus home when I saw the Old Vic Theatre tweet that they were holding open auditions, which is basically unheard of for such a prestigious theatre.”

“I really saw it as a last-ditch attempt at acting to be honest. There were 1,500 people at those open calls and I was selected as one of the final seven for the play ‘Jess and Joe Forever.’ I was then signed by Curtis Brown and my first gig with them was Derry Girls.”

And so Clare Devlin as we know her was born.

A past student of NUI Galway, Nicola always had an interest in acting.

“I knew I wanted to act, but I wanted to have a college experience too,” she says. “I probably spent more time with Dramsoc and the Musical Society than I did studying though. My friends and I would always go to Cuba and the GPO, which is probably showing my age because they’re not even around anymore!”, she jokes before asking if it’s Karma or Carbon that is now in place of the GPO on Eglinton Street.

“I loved my time in NUI Galway. I’ve always seen Galway as a real student city that’s so welcoming to everyone because most people are blow-ins, and that makes it so culturally diverse as well.”

While studying in Galway, Nicola competed in ‘Acting Up,’ the National University Improvisation Competition where she was awarded the Outstanding Individual Performance Award, which she says gave her the confidence to pursue acting upon graduation.

After graduating with a degree in English and Classics in 2008, she auditioned for the Oxford School of Drama, and despite her worries that she did the worst audition of her life, she was offered a place on their foundation course.

“It was at Oxford that I really found my tribe. There were 26 in the class, and I was the only Irish person in it. Everybody else embodied the perception that I had of actors. But as time went on I realised that there is no such thing as one ‘type’ of actor, and it would be a very boring industry if there was.”

“After Oxford, I didn’t get in to any full time course so I worked as a receptionist in a physio clinic, which I found difficult. I began to wonder if it was just a pipe-dream, but luckily I got in to the Birmingham School of Acting in 2010/11.”

It was then when the lull in opportunities occurred before ‘Jess and Joe Forever’.

“Leaving acting behind would have really broken my heart,” she says. “It’s in your blood, but at the time it wasn’t financially realistic to continue with it. I’m so lucky that my friends and family supported me throughout it all.”

The Derry Girls script and Clare Devlin as a character were what drew Nicola to the series.

“I remember reading it while on a tour bus to Newcastle and it really stuck with me. I really had a feeling that I was meant to play her.”

“We had to forget the pressure for season two. When it’s just the five of us again in a scene, you can’t be thinking about the viewership figures.”

“Admittedly, I was a bit nervous about season two until I saw the script, but Lisa has so many stories to tell that there was no need to be nervous at all,” says Nicola.

The final episode of season one reveals that Clare is in fact gay, something that Nicola was aware of throughout the filming process.

“The rest of the cast hadn’t a clue. They were shocked when they read the script for episode six, and I was like ‘duh.’ I had to keep that at the back of my mind. There are ways you can approach that subject in a drama, but in a comedy you have to make sure you’re not making jokes at the expense of someone watching at home.”

The show also launched worldwide on Netflix before Christmas, and has found a strong fan base across the pond.

“It was only when myself and Louisa (who plays Orla McCool) went to New York for my birthday in January that we realised the impact it was having. We had people congratulating us and giving us free shots in bars in New York. It was so surreal.”

“But you have to take all that with a pinch of salt. I could be at an awards show one week but then the next I’m back home in Galway. Obviously it would be great if I worked forever, and I hope I do, but you can’t let it all get to you.”

At the time of interview, the first episode of the second season has aired, in which Clare and the rest of the girls are on a retreat to create ‘Friends Beyond the Barricade’ with a nearby boys’ Protestant school. Those who have watched the episode will remember Clare having to abseil on a cliff in one scene, which Nicola was terrified about.

“People don’t realise how long it takes to make these scenes. We shoot to a really tight schedule so the days are long. I was up there for about seven hours, and the annoying part is that it looked much smaller on screen than it actually was! It was about 60 feet!”

That episode launched to a consolidated viewership number of 3.2 million, making it Channel 4’s biggest audience for a comedy series since 2007.

Beyond acting, Nicola has a strong presence on Twitter and is quite vocal about issues that she feels strongly about. Recently, she marched on Westminster with Siobhan McSweeney (Sister Michael) to highlight the issue of abortion in Northern Ireland. 26 other women joined them in delivering a 60,000-strong petition to Secretary of State Karen Bradley, symbolising the 28 women who travel from Northern Ireland to other parts of the UK for an abortion each week.

“My view on it is that the women in the north were really supportive of us during last year’s referendum, and it would be a real shame if we didn’t return that support now. It’s just not right that these women are being treated as criminals.”