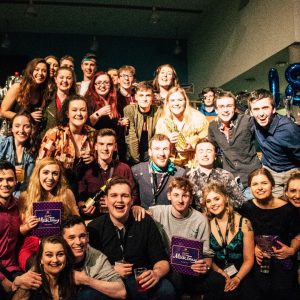 They wowed us earlier this year with their week-long run of The Producers in the Blackbox Theatre, and last month Galway University Musical Society (GUMS) did it again, nabbing the runner-up spot at Musical Inter-varsities.

The event held in UCD over 23 and 24 March saw musical societies from across Irish universities compete to be crowned the best in all the land, with NUI Galway threading the boards with their performance of the original murder-mystery musical The Greenbrier Murder of 1982.

The piece was written and composed by Third Year Drama, Theatre and Performance student Patrick Conneely, the GUMS star who lead the society to roaring success as Bobby Strong in last year’s production of Urinetown. He told SIN that seeing his work come to life over the past few weeks was “really exciting” and something he would remember for a long time to come.

“Hearing the cast sing each song for the first time or watching a scene develop over time was really satisfying. One of the best advantages we had was that the entire cast and crew were extremely enthusiastic, so new ideas were constantly flying around,” explained Patrick.

“So many things changed over the few weeks but eventually everything clicked into place and we were ready for the stage.”

This was the first time GUMS performed an original musical and Patrick explained that it went down a storm on the day.

“We were all excited to be the first to do it. We competed against CIT, UCD, DCU, Queens, Trinity, and Maynooth up in Dublin on 23 of March and we placed second overall. We were delighted with this result but the response we got from the audience and the other colleges felt like our real victory – there were moments where dialog and lyrics could not be heard because the crowd were laughing or cheering or clapping too much. It was a very nice problem to have!” he said.

Asked about the creative process behind the piece, Patrick said that an 80s themed musical was always something he had in the back of his mind, but he changed the setting a few times before settling on a glam but gaudy hotel.

“I’d been thinking about doing some form of original musical for ages but never settled on an idea until this project. I always wanted it to be set in the 80s and I always wanted there to be a dark sense of humour in it; I liked the idea of a musical starting out really happy and chirpy but then almost instantly turning dark and grisly,” he said.

“The idea of a murder happening almost straight away in the story seemed really grim but really funny. I thought of a good few different settings like an aeroplane or a restaurant but a luxurious hotel seemed like the best choice in the end.”

The cast has been inundated with requests for an original cast recording of the show since their success in Dublin and fans can expect to see the five original songs appear on Spotify over the coming weeks.

GUMS auditor Aisling Bonner was a part of the troupe who performed in UCD. She told SIN that the “electric” atmosphere in UCD really set the tone for their performance.

“The feeling coming off stage after the performance was something I will never forget. If I could have bottled the sound of the audience roaring and banging their feet I’d play it all day long – we all felt like Beyoncé,” she laughed.

She was thrilled to get the opportunity to perform one last time before her graduation this year and said she was honoured to be involved in the competition.

“Being part of the first cast to perform an original musical is genuinely an honour and the feeling of doing Patrick and the rest of the production team proud was definitely what drove us in the end,” she said.