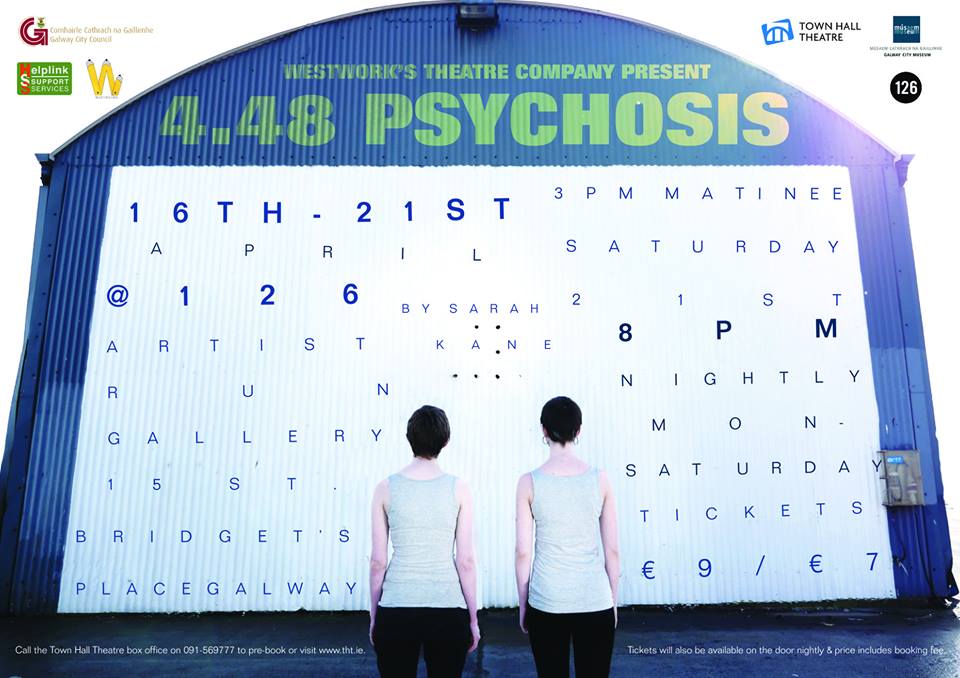 Two NUI Galway Drama students will perform in new theatre group West Works Theatre Company’s production of 4.48 Psychosis in Gallery 126 this month ahead of Mental Health Month in May.

Aoife Delaney and Anna Doyle will take to the stage in Sarah Kane’s controversial and poignant mental health drama which runs from 16 – 21 April. The play aims to tackle taboos that still exist around mental health and institutional treatments.

Producer Féilim O’hAoláin told SIN that this stripped-back performance was set to be a “truly thought-provoking” experience for the audience.

“Kane’s poetic narrative removes character references, locations and times opening a whole series of amazing challenges for theatre makers bringing her work to stage, or in this case to the gallery floor,” said Féilim.

“Director Kieron Smith has decided to use just two performers, Aoife Delaney and Anna Doyle of NUIG Drama department to bring Kane’s poetic and hard-hitting exploration of mental health into a new creative force. This is part performance art and part theatre, there are no seats and the set stripped back with a haunting soundscape by composer David McEntee,” he explained.

“A fearless and unorthodox portrait of an experience of clinical depression”, director Kieron Smith described the play as a chance for the audience to learn more about the struggles of someone dealing with mental illness.

“It’s an invitation to step into the shoes of another. For me 4.48 Psychosis has always being rooted in love. It’s Kane’s love of life that shines bright amongst the fragmented world she presents us as creatives and audience alike,” he said.