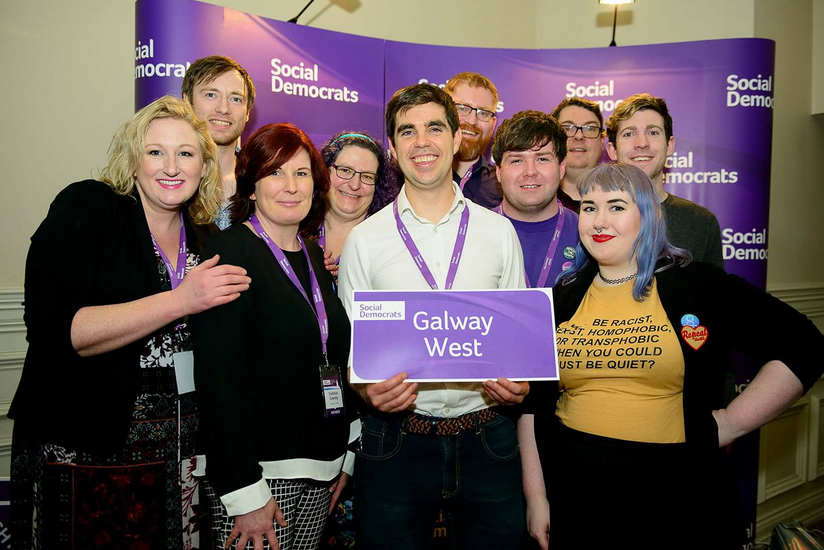 Founded by three sitting TDs in July 2015, the Social Democrats had high hopes of a breakthrough in the last general election especially since one of those TDs, Stephen Donnelly, made a splash with his performance in the television debate featuring all seven party leaders in the Dáil.

But the party came back with no more than the same three TDs who went into the election. Worse yet, Donnelly left the party in September 2016 and joined Fianna Fáil. However the party has refused to throw in the towel and rejected overtures from Labour to form some sort of alliance in the Dáil.

The Social Democrats presently have a small office in Westside next to The Blue Note. The party’s local politician Niall O’Tuathail says that it was swiftly set up in preparation for what looked to be a Christmas 2017 election.

Speaking to SIN, O’Tuathail outlined the goals of the Social Democrats – investing in the basic public services that everyone needs like housing and education, making sure there’s a strong economy, and having more transparency and less corruption in government.

Some have concerns that the party hasn’t distinguished itself from other left parties. The Irish Times wrote that the party “battled to forge a distinct identity for itself in the Dáil in competition with other left-wing parties and an array of Independents.”

However O’Tuathail told SIN the party is firmly focused on their own goals and learning about what the Irish people are looking for from their local TD.

“Most of the work is getting out and having one-on-one conversations with people,” he said.

“It’s about knocking on someone’s door on a Thursday evening and saying ‘Hey, we’re the Social Democrats. Do you have any questions for us?’”

“Obviously, social media is more and more important. It’s a very helpful way for us to get people from kind of knowing about us to actively supporting us. And the traditional media… we’re trying to get our word out through the press as well.”

Asked for his one message to the students of NUI Galway, O’Tuathail said; “You are incredibly powerful and you don’t know it.

“Even just making sure you’re registered to vote and getting out and voting, that’s an incredibly powerful thing,” he explained.

His aim is to encourage the active engagement of young voters, and show students that politicians will do something for them.

“I will never get into this thing of saying ‘Oh, young people don’t vote.’ Anyone who says that to me, I say to them ‘Well, what do you do to inspire them to get out and vote?’ If I’m a 20-year-old student, what’s the difference for me between any of the parties?

“I need to be so good and different and positive and speak to what you want and need that it encourages you to get out and vote.”

O’Tuathail also emphasised the importance of volunteer work to support a political party and help them gain ground on the Irish political landscape. He believed students could play an active role in this process.

“You have no idea how much a volunteer in a campaign makes a difference. We were 1,500 votes short last time in Galway West here – not very close but not far away from getting elected. Another ten volunteers would have been the difference between winning and losing,” he said.

“I ran Stephen Donnelly’s election campaign back in 2011 and he won by 30 votes. Literally every single volunteer was the difference between winning or losing.”

O’Tuathail acknowledged that Donnelly’s move from the Social Democrats to Fianna Fáil was “difficult”.

“It was hard for us as a party. He’s a fantastically talented person and it was a pity to lose him. I don’t know if he believed the party could grow to lead a government. And that’s the difference – I disagree. I don’t think that you can really change Ireland by going into Fianna Fáil or Fine Gael. I think the party culture in Fianna Fáil and Fine Gael is very incremental. They just do bits and pieces here and there,” he said.

He said “nothing will change” until there is a shift away from the Fianna Fáil/Fine Gael dominance.

O’Tuathail wants to bring “big ideas that we know work from the Scandinavian countries,” ideas that “we know are going to improve people’s lives and make sure there’s a bit more fairness and equality and can drive forward the economy.”

He was quick to clarify that he wouldn’t be simply implementing policies from other countries; “You have to do something for the Irish context,” he said.

O’Tuathail’s manner is self-assured and hopeful. Critics may continue to dismiss the Social Democrats as a rudderless ship that has lost its captain but if he builds some more support, it seems possible O’Tuathail can help to build Ireland’s first successful centre-left party.