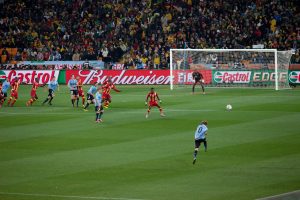 Let’s face it, for the most part 2017 was quite a flat year in terms of sport. There was some undoubted high points such as the two All-Ireland finals, Ireland’s win over Wales and the New England Patriots remarkable Superbowl comeback victory. But in a gap year for the major international football tournaments and the Olympics, 2017 felt a lot quieter than its predecessor 2016.

In fact, the main reason why the 2018 sporting year should easily eclipse 2017 can be summarised in one short sentence. It’s a World Cup year. Russia are of course the controversial hosts, and how locals react to the tournament will be largely contingent on their performances. Despite their home advantage however, their national side will face a difficult challenge to get out of their group.

Although their group, which includes Uruguay, Egypt and Saudi Arabia, is certainly not the hardest in the tournament, it is deceptively tricky. Uruguay may be ageing but they have proven World Cup pedigree and the firepower of Suarez and Cavani, while Africa’s most successful nation Egypt topped their qualifying group and will be desperate to finally perform on the World stage as they have done in regional competitions for years. Russia on the other hand were arguably the worst team at the Euros in 2016.

More generally, cup holders Germany and Brazil are currently the bookmakers’ favourites. For the Germans, it will be a question of whether the squad has the motivation to do it all again and can prevent burning out as Spain did so spectacularly in 2014. Brazil meanwhile were imperious in qualifying, finishing top of the cut-throat South American section, but it remains to be seen if the side has really gotten over the trauma of the Mineirazo with their crushing 7-1 defeat to Germany having occurred only four short years ago.

France, Spain, Argentina, Portugal and Belgium will likely be among the other major challengers, but the World Cup is never just about the teams who can win it outright and next summer will be a hugely special occasion for debutants Iceland and Panama. Furthermore, don’t be surprised if some of the smaller nations end up stealing the show providing the best storylines, emotion and drama of the tournament.

With notable debutants comes notable absentees, and some of the prominent names among those who missed out include Italy, the Netherlands, USA and of course Ireland. Looking on the bright side, Ireland’s absence might mean that the women’s national team get some deserved attention.  After three games, Ireland currently sit joint top of their 2019 World Cup qualifying group alongside European Champions Netherlands, and ahead of Norway, who are one of the traditional heavyweights of the women’s game. Colin Bell’s side will welcome both those teams to Dublin in 2018, as the Girls in Green will try to keep the dream of qualifying for their first ever major tournament alive.

As bad as the Irish men’s Denmark humiliation was, the USA’s embarrassing failure to qualify was much worse. Americans can at least take solace in the fact that they will likely be near the top of the medal table at the Winter Olympics in Pyeongchang, South Korea in February, especially when it’s taken into consideration that Russian athletes have been banned from competing.

Another unique feature of these games will be that North Korea look set to send a team consisting of the figure skating duo of Ryom Tae Ok and Kim Ju Sik. Providing that the necessary paperwork gets done – North Korea missed the initial deadline to register the two skaters for the games, but it appears they will be given special dispensation –  it will be a small first step towards the normalisation of relations between the two Koreas. The Winter Paralympics will also be in Pyeongchang taking place in March.

Closer to home, both intercounty GAA championships will debut their new formats, which are the most radical changes to the intercounty game since the introduction of the “back door” at the turn of the century. In football, the Super Eights format has received criticism as many believe it will only serve to widen the gap between the top counties and everybody else, while in hurling, the round robin format in the provincial championships offers counties more games, but there will only be four/five games in July and August – the best months for playing hurling. No matter what way these changes are ultimately received, it should be fascinating to chart their progress throughout the summer.

In Rugby, Ireland will likely battle it out with England for the Six Nations title. Something to look out for in the Six Nations and indeed Ireland’s summer tour of Australia, will be whether Joe Schmidt tries to blood new players such as Jordan Larmour ahead of next year’s World Cup.

Elsewhere, May will be a historic month for the Irish cricket team as they play their first ever test match against Pakistan in Malahide. It’s shouldn’t be overlooked how remarkable an achievement it is that Ireland have achieved test status, and it is a testament to the efforts of Cricket Ireland that they have managed to get to this point.

Some of the other major events of the year include the Ryder Cup in Paris, the Commonwealth Games in Gold Coast, Australia and the inaugural European Sports Championships in Berlin and Glasgow. If you’re searching for something to distract you from all the depressing news in the real world in 2018, sport will give you plenty of options.