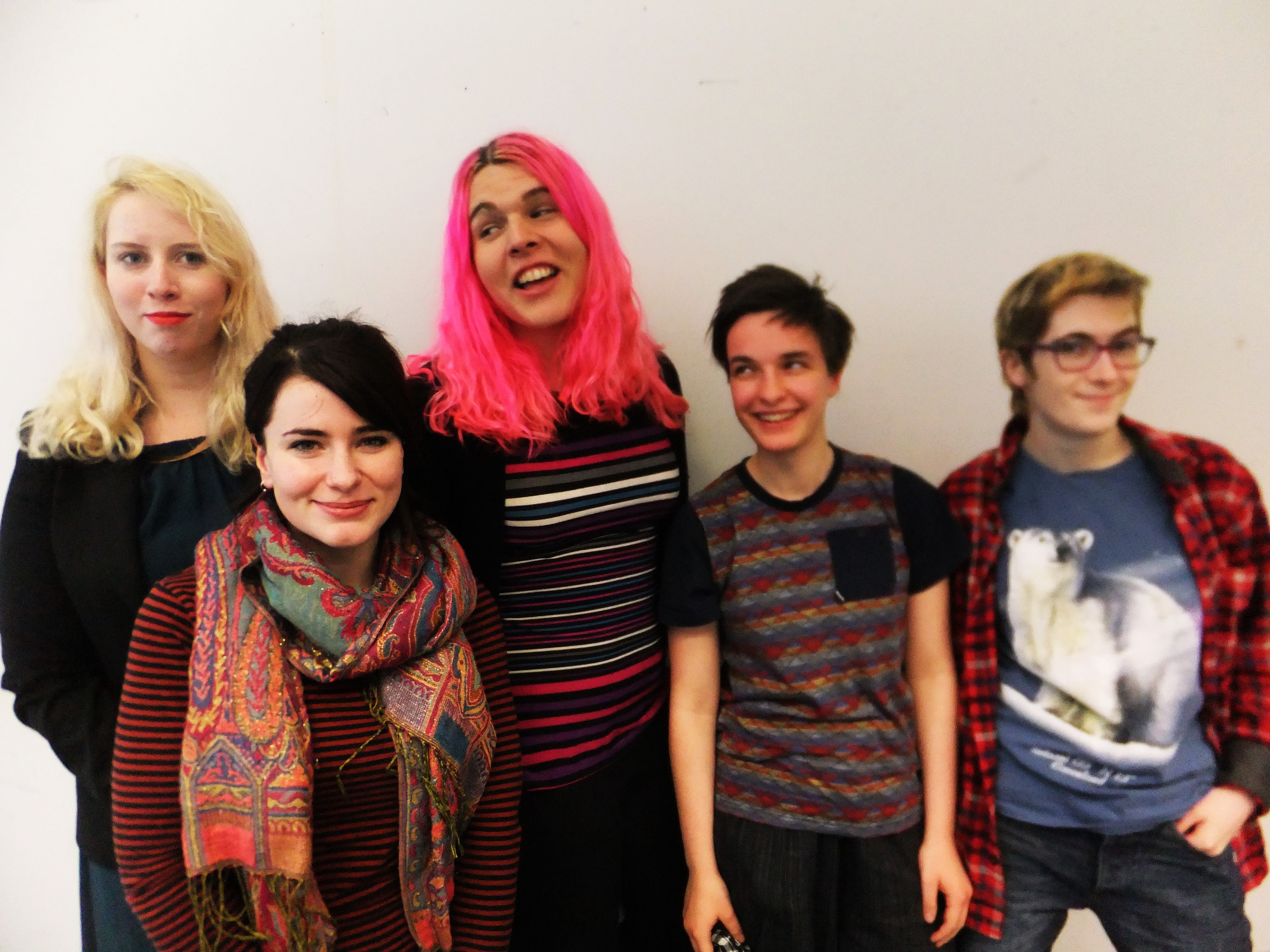 It’s 12.40pm on Friday afternoon, and my editor Jess and I are brisk-walking into college from the Blackbox theatre car park after failing to find a spot amidst the university open day rush. We were legging it in to make it on time for a talk with the cartoonist behind the web comic Assigned Male which was organised by the lovely people at ShoutOut.

Admittedly, I had never heard of Sophie Labelle and her web comic prior to a last minute invite the night before. I spent the night reading her work online; trying my best to do some research in order to not look like the uninformed idiot at the talk. Immediately I fell in love with her colourful cute illustrations that were adorable and fun to look at, and dealt with serious topics that affect the Trans* and non-binary gender community.

We wait inside Meeting Room 2, eagerly awaiting Sophie Labelle. As it turns out, she is a pretty big deal, with people commenting on how one person has pink hair just like Sophie. I’m embarrassed that I didn’t know her work before the talk, but the exciting atmosphere still managed to make me even more eager to meet her.

A luminous pink-haired woman walks in, and the whole room goes quiet. Labelle has a wonderful presence. People’s faces are lighting up, one or two people begin – for want of a better word – ‘fangirling’. A camcorder light blinks red as everyone begins moving their seats into a circle, closer to where Labelle sits at the top of the room.

Manga and colouring books: the early days of Sophie’s career

Before becoming a full-time cartoonist, Labelle worked as an elementary school teacher. Alongside this, she also worked as a Trans* rights activist and at youth camps for Trans* children. In the discussion, Labelle spoke about the colouring books available to the children in her class, the subject matter of the pictures, and how they abided by a lot of gender stereotypes.

Labelle published a colouring book for children, which, in her words is “a subversive version of generic colouring books” with pictures such “knights in dresses” and other such images which challenge the gender binary.

Her cartoonist style she attributes to “a mix of European cartoons and Japanese cartoons, like anime and manga”.

“I feel my style is really cute, but that could be because I’m an elementary school teacher. So, I’m used to working with that kind of stuff,” she says.

In the early days of Assigned Male in 2014, the language used was very adult in the sense that it dealt with themes that would often be viewed as too complex for children, however her younger readership continued to grow.

I asked her about the young audience, whether it was all down to the fun and colourful accessibility of her style that might appeal to children. Labelle answered that it was an issue of representation; “They needed a representation, mostly. I think they would have read anything.”

Speaking about her time working with children, Labelle said; “Well working with children who transitioned as early as three years-old or four years-old, I found that when they know that someone is advocating for them and they are secure in their home – and when they’re not being validated by society because of their body, like when everybody sees them as their gender – there is a lot less trauma. The pressure to alter their body, to meet certain standards is really different instead of facing constant obstacles to being validated as their gender.”

Now the language of the comics is more accessible without neglecting the necessary terms and concepts. Fixing her luminous pink hair into a ponytail Labelle says; “The more simple [sic] it [the comic] is, the more easily it’s shared.”

Her work uses everyday objects and scenarios like brain freezes from ice-cream, babysitting and the class photo to resonate with both Trans* and cisgender audiences and provide a better understanding of the issues the Trans* community face.

Labelle repeatedly spoke about how “words are weapons” throughout the talk. Reflecting on her own transition, Labelle spoke about the importance of having a word to identify with. From Quebec in Canada, Labelle told me about how the word ‘transexual’ was still in use up until recently. Yet 15 years ago, the term was progressive.

The first time Labelle heard the term was in a documentary about a transwoman in her 60s. Although, she says, it was “unrelated to me” and “so far from my reality” it was extremely significant to hear a word she could identify with at the time.

“I started my transition as soon as I started defining myself as Trans*, and I needed to have that word.”

Upon reading Assigned Male, the positivity reflected in each comic is its obvious stand-out feature. Generally speaking, when discussing Trans* issues the tone is somewhat intense or negative, essentially because we still live in a world where the consensus is that gender is a binary, therefore the Trans* community are inevitability marginalised.

However, Labelle intentionally made her comic convey these issues with a serious message but in a playful, humorous environment; especially regarding the concept that being transgender equals ‘born in the wrong body’.

In her talk, Sophie mentioned that she likes to include positivity in her comics relating to Trans* issues. But what exactly does that mean?

“The message isn’t that there’s no suffering related to Trans-ness, because Trans-ness is obviously like being put in the margins of society. So it’s not about saying that there’s no struggle because there will be almost all the time,” she explains.

“But [it’s good] to have a message out there that’s not just all about how it’s hard and how Trans* bodies are wrong in their nature – and just to situate the problem outside of Trans* bodies.”

Following the topic of the focus on Trans* bodies, Labelle discussed at length another issue which she touches on in Assigned Male, which is transfeminism.

According to scholar and activist Emi Koyama, transfeminism is “a movement by and for trans* women who view their liberation to be intrinsically linked to the liberation of all women and beyond”.

Additionally it “is also open to other queers, intersex people, trans* men, non-trans women, non-trans men and others who are sympathetic toward needs of trans*women and consider their alliance with transwomen to be essential for their own liberation”.

In a nutshell, as defined by Wikipedia, transfeminism is “an approach to feminism that is informed by Trans* politics”.

The treatment of transwomen in medicine is something Labelle commented on; “Since we started studying Trans* bodies, especially transwomen’s bodies there’s a very misogynistic thing that’s going on with the doctors that consider femininity as being something artificial and superficial, while masculinity is something everyone would want to achieve.

“That’s why they only started studying trans*men in the 1970s. While trans*women have been subject to numerous studies since the 19th century – like it was always focused on transwomen. Trans*men or trans-masculine people weren’t seen as being sick as transwomen were, because femininity is viewed as kind of defect; as being lesser than what’s natural.”

Transfeminism and the future

It was clear to me that Labelle had a lot more to say in her work. I pressed her about the future of her web comic, and the possibility of moving away from Assigned Male: would she ever consider writing a new web comic concerning other issues or themes?

“Yes definitely. I’m trying to shift to include more issues. When I started this comic, I actually found out something really important where girls overall, not just Trans* girls or Trans* people, are not represented in anything. Girls aren’t represented, especially in comic books,” she said.

“I’d like to move towards larger feminist issues. Trans* issues are feminist issues but I want to open up to more. I talk a lot about gender stereotypes in my comic. I feel like there would be more to say about girl socialisation.”

Labelle appears to be an incredibly informed person, and with her experience as a Trans* person, an advocate, educator and activist it is no surprise she is so influential, in keeping with the comic book theme, ‘with great power comes great responsibility’.

Labelle’s voice saying “words are weapons” kept ringing in my ears. I couldn’t help but ask her about how the powerful socio-political message of her comics must bear a great responsibility.

“But I feel like I have to be more on point about everything, because I feel like if I’m wrong on something it’ll have repercussions – and if it shows in my comic, well then people will be misled.”

This led Labelle to tell me why and how she is so well informed, explaining that her web comic is a learning curve:

“I feel like I need to know everything on a subject before talking about it. It is a lot of pressure, but it also makes me give it my best. As the comic grows in popularity, I feel like it makes me learn so much. I learned so much in the last year: just issues I felt like I needed to know and care about, just because of my comic.”

What was intended to be a quick ten minute interview turned into a deep and comfortable conversation between Labelle and I, but with people who were at the talk gathered around in a circle listening. It felt like the exclusive ‘director’s cut’ of a film upon its DVD release but at the same time it felt like we were friends.

The room was booked until 3pm and now it was nearly 3.30pm. I decided to wrap up our chat with one last question, concerned that Labelle was probably starving having not partaken in eating as many mini muffins as I did at the break.

Besides her past, her political concerns, her activism, her as a transwoman and the people she writes about; besides all the positivity, the negativity, the responsibility; in the end it all boils down to Sophie being a professional cartoonist. So what advice does she have for budding cartoonists?

Labelle giggled and blushed modestly. It was almost as if it were the first time she heard herself being referred to as a professional cartoonist. She continued to respond quite modestly: “Work. Work a lot. If I can describe myself as a cartoonist now, that’s because I draw a lot. I draw a lot of cartoons.

“My sketch book is full of cartoons that I will never finish or go to final version. You need to always work, and yeah that’s how you find the gems: in the middle of a bunch of peddles.”

But it’s not just the hard work that made Sophie so successful: “I came from a very low class family; underprivileged but in a house filled with books. My mum is a word-lover, so I would always read her books. I consider this a big privilege when you want to work in the book industry.

Sophie Labelle is currently on tour around Europe, therefore books won’t be available to purchase until 1 December. However, you can follow her web comic series Assigned Male on her website http://assignedmale.com.