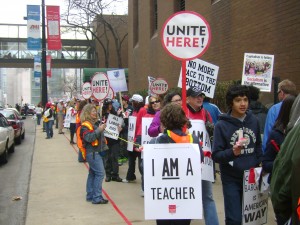 Secondary school teachers are to strike early December, as a row over proposed reforms escalates.

A spokesperson for the TUI confirmed its members, along with those of the ASTI, intend to hold a strike on Tuesday 2 December. Another potential strike in January is being discussed. Education Minister Jan O’Sullivan commented stating the decision is “disappointing and disproportionate.”

The strike dates came after 10 November, when teachers rejected a set of revised proposals, saying the ‘internal assessment’ model would not be acceptable.

A joint statement from the TUI and ASTI said: “The unions welcomed the shift in position by the Department of Education and Skills on some issues in recent negotiations, but issues of critical importance were not resolved.”

Under the proposed Department of Education’s plan, teachers would still assess 40 per cent of a student’s in class work and award a grade accordingly. O’Sullivan warned that no more concessions would be given. The proposal also included elements such as final exams in third year accounting for 60 per cent of the junior cycle marks, exams to be marked by State Exams Commission, and the State Exams Commission to check a proportion of teacher assessments to ensure consistency and fairness.

O’Sullivan commented after the proposal refusal: “Over recent months I have accepted the genuine concerns that many teachers had about the future of the junior cycle. In putting a new offer on the table this week I have gone as far as I can to address those concerns while still maintaining the integrity of the junior cycle reform.”

She ended by stating that the new proposed reform in the junior cycle is “in the interest of students.”

The National Association of Principals and Deputy Principals has expressed its disappointment at the move, and asked both unions to look at the offer once again – while it still stands.