It’s been a long year for the SU, and Marése O’Sullivan has been busy finding out how they feel they got on… 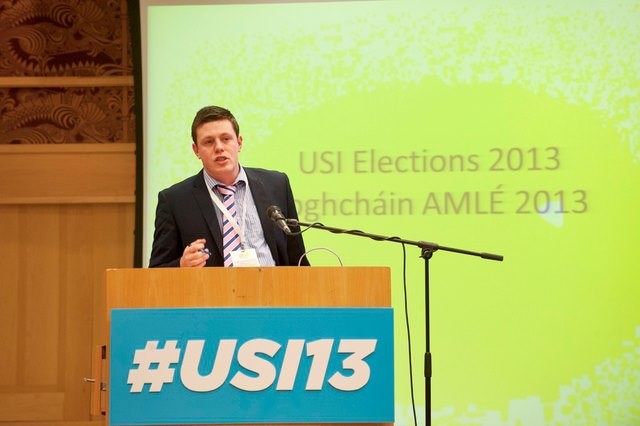 So, Paul, how was the experience of being Students’ Union President?

It was probably the greatest eye-opener I’ve had to date. It was a lot harder than I expected it to be. You have to play both the student and the professional at the same time, and getting that mix [right] can sometimes be difficult. You represent the Students’ Union on so many bodies and you only have one year [in a position that] people in higher-up roles in this institution might have known well for five or six years. It’s only right now that I’m getting into what I’d call some of the ‘forensic financials’ of where I think the college might be going wrong. I’ll pass that onto Sean [Kearns, new S.U. President] next year.

Do you feel like you need another year to really sink your teeth into the job or are you happy to leave?

Maybe a mistake I made is that I should have brought forward the referendum regarding the [Students’ Union] roles, which start in June, because there are only two months to get into the role, which can be a bit short to plan. In three months, there would be a better chance of hitting the ground running.

Have you achieved the objectives you set out in your manifesto?

I always said I wanted to be held accountable. This job means you’re in a reactive position most of the time. A lot of [issues] come up during the year that you notice should be dealt with – for example, an office on the North Campus, and a part-time paid Postgraduate Officer for next year, which we’re close to getting. I didn’t put those in my manifesto, but I’ve realised that I need them. The SU’s student engagement reform was one of my big [aims]. In a way, the SU had lost touch with students; at last year’s SU Council, there were thirteen Class Reps, but this year over 120 students attended. The little things, like the exam buses and Condom Wednesdays – we’ve handed out over 25,000 condoms – engage students, who wouldn’t necessarily normally see the SU as any use to them. It’s hard to describe the issues you raise at meetings to students because we’re not on the University Management Team (UMT), which is where the real decisions are made; we’re on the ‘signing off’ body, essentially. If we were to be put on UMT, even as a non-voting member, we could be of value to the university with our knowledge of what students want. Not having a seat on that board affects us greatly.

Entertainment-wise, I failed, straight out. The college and its President are against having a huge event. I’m putting forward a plan to the Students’ Union Projects Fund to get €150,000 underwritten, to use the Arts Festival tent [for an NUI Galway Ents event]. Tickets will hopefully be about €40 next March, with good acts, [to provide an] NUI Galway Ball for 3,500 students. If there’s profit made on it, it will go back into the Students’ Union clubs and societies. We cannot afford to have RAG Week events: we haven’t got the funds.

Regarding the gym, I was iffy at the time [I was elected] about the referendum. I don’t think we should go near it now. Universal gym membership is absolute stupidity in the current climate with the trends that we’re seeing. I know in general it would be good for students’ health, but I’d be of the opinion that the Students’ Union should not support it and wait for the levy on the gym to be either paid off by the students or for the college to fund the rest of it. I feel the college wants universal gym membership more than the students for a marketing purpose, because University College Cork, Trinity College Dublin, and University College Dublin all have it.

You said your biggest SU goal was to get “as many students active in NUI Galway as possible,” and that you hadn’t seen “an S.U. President in the last few years that had delivered”. Do you believe you have achieved these aims?

My reports to the SU Council have been six pages of exactly what I’m doing. No one’s perfect, although I thought I was last year. 75% [of my aims have] been achieved. It was said to me recently by a lot of people to run for re-election, because first years knew who I was. It’s seen in our march and in the Welfare Crew that we engaged students and got them to be active. I think I’ve delivered a certain sense that the Students’ Union could be for everyone this year, while previously it might have been [extended just to] societies. When students do have problems, they know where the Students’ Union is and they have a fair idea of what we can do for them. It’s about breaking down the small barriers [to prepare for] a bigger issue that we can help them with, [particularly related to] Student Universal Support Ireland (SUSI) and welfare. I represented the students of NUI Galway very well in all the different situations and I’ve called a spade a spade when I’ve seen it. I haven’t stood down from challenges that previous SU Presidents have tried to avoid. I hope students respect me for telling them the truth.

Why didn’t you run for re-election?

It can be a very intense job. I felt that maybe I could be out of touch with students next year. As President, you end up spending a lot of time in your office, but I have very good friends who tell me honestly how I’m doing and what the feeling is on the ground. You have one year and you give it [all] your energy. It’s not a 9-to-5 job: even on nights out, people ask you questions. Although I don’t really mind that, sometimes it can get really annoying. I’ve given the effort that the job deserves for the year and more, but I’ve seen people spend too much time in Student Unions, through my time with the Union of Students in Ireland. Very few get better [at their position] and a lot get worse – if they stay stagnant, it’s difficult to have the same energy to do it again.

You stated that you’d like to be “a President that everybody respected and believed in,” and at the end of the year you’d do everything you’d said you would. You wanted to “leave the position in a better way” than you’d found it. Is this true of your Presidency?

Everybody doesn’t respect me. You’re never going to be liked by everyone. Everyone expected me to be an absolute idiot as President but I’ve changed a lot of people’s opinions of me through my work. I didn’t get everything on my manifesto done, but I’ve brought stability to the Students’ Union. People wouldn’t come out and support us in marches if they didn’t believe in us and didn’t trust us. When students got screwed, we went above and beyond, in my opinion, to make our point about the grant threshold being changed by going to Taoiseach Enda Kenny’s office: the only retaliation by two Students’ Unions across the country. The name of the campaign was ‘Fed Up, Stand Up,’ and every other Students’ Union in the country sat down. I think the position’s in a better way now than it was [when I started] but no one ever made the Students’ Union: you’re there to improve it and leave.

What aspect of the role challenged you the most?

Switching modes so often – if you go to a meeting with Class Reps, you have to be charismatic and a leader; if you attend a meeting the same day with the Finance Board, you have to be professional, wear a tie, start pointing out figures that you don’t believe are right, and mention what the college is doing wrong; then you might go to a speaker engagement that night, where you’ll be brought to meet someone as SU President: you’ll be professional but, at the same time, you’re being one of the students. If you’re on campus and you’re the head of 17,000 students, you have to be seen, because otherwise students don’t think you’re doing a good job. It’s something I’ve neglected in second semester.

Have you any regrets?

I talked the talk but I didn’t walk the walk. [As part of the SU,] you have to learn fast, you have to act fast, and you have to deliver fast. When I came in here, I found out what my budgets were and it was different. If I can get the Student Union’s Project Fund through, although people mightn’t recognise that I’ve done it, that hopefully will be me making up for not delivering for students. I also didn’t enjoy my time enough [as SU President]. You can get bogged down in work a lot of the time and in what people think. At the end of the day, I have to be professional in this job, but I must remember I am a student. [However,] I got elected with the highest vote ever in the college, which to me was an honourable achievement, to have that sort of support from students. I just wish I could have been more myself.

What will you miss most about the job?

If you’d asked me this at the start of the year, I would have said ‘being noticed around the place’, because my ego sometimes got the better of me. But I’ve grown up. I’ll most miss that feeling you get when you do a lecture shout-out and where you properly get the class revved up about a certain issue because they believe you’re representing them the best way they could be. You can be serious but crack a joke in front of 300 students; you can get quietness when they were all talking two minutes beforehand.

Can you describe your year in five words?

What would you like to say to those who’ve supported you over the year?

I’ll have fond memories of my time here. I’d like to thank all the staff members: the General Manager, Chris Newell, the Assistant Manager, Joanna Brophy, the receptionist, Lorna Shanley, and the Accounts Assistant, Claire Divilly, for helping me out during the year. People don’t see them, but they do great work. It’s hard to put into words how grateful I am for the support I’ve received from the Students’ Union and the university, as well as everybody I’ve met over my five years that got on with me and urged me on to do better. People would have laughed at me in secondary school if they thought I was going to be Students’ Union President because I was a bit of a cheeky chappie, but I think as you go through university you grow as an individual. You learn from your mistakes and achievements. So I’d like to thank everyone for helping me to be the person I am today.