It’s d-day for the election candidates, and as the count is on-going, Sin Editor Jessica Thompson brings you the results as they happen. Stay tuned for regular updates…

The View is buzzing with excitement as the count for this year’s Students’ Union Elections takes place. Students, SU Officers, candidates, and others gather in the room to await the results. I’m sitting quietly in a corner observing the happenings, and bringing you the updates as they happen.

And we have a winner! With Rory McCormack’s votes transferred, the results are as follows:

This leaves Sean Kearns as the winner.

Your SU Officers are as follows:

We’ve had the first count for the Presidential Election, and it’s tight. There were a total of 3646 votes in total. 83 of these were spoiled, leaving a total of 3563 valid votes. The quota to reach is 1782.

And the results are in! A hush descended over the room and the atmosphere was tense, but the results were as follows:

The lowest candidate has been eliminated, leaving the position of Welfare Officer to Declan Higgins. The room erupted when the results were announced, and the highly popular Welfare candidate was hoisted onto the shoulders of his campaign team. It’s over for Welfare. Now it’s time for the Presidential count: the head honcho; the big cheese.

Things are moving quicker now, as the results of the fourth count are in. Saoirse Nic A’Bhaird’s votes have been distributed among the other candidates accordingly and the results are below, with Higgins still in the lead:

There were 87 non-transferable votes. Claire’s votes will now be transferred, and the result of this will decide the new Welfare Officer.

The results from the third count came in quite quickly, and things are getting tight now as Patrick Clancy’s votes are transferred.

For this count, Nic A’Bhairde has been eliminated and her votes will be transferred. Declan Higgins seems to be taking the lead now, with Cathal O’Hagan in close pursuit. It all depends on transfers now.

Returning Officer Ken Curtin has congratulated all the candidates on a very fair campaign.

He said; “I want to thank you all for the way you handled the campaign this week. It’s been a pleasure to work with you. All candidates and their teams got on and  fought a fair fight. It hasn’t always been this way. I’m somebody who has ran in the past and finished second last and last, and went on and won in the polls after. Everybody who wran this week can be proud of themselves and their teams.”

The second count is in for Welfare, and the results are as follows:

None of the candidates reached the quota, so Patrick Clancy has been eliminated from the race.

It’s been a tense first count for Welfare, but the results are in. With a total of 3639 people voting, 83 of which were spoiled votes, there was a total number of 3556 valid votes. The quota for election is 1779.

The results of the first count are as follows:

As none of the candidates reached the quota, there will be a second count. RON has been eliminated, and even if RON’s total number of votes were transferred to J.D. Kiely, it would not be enough to bring Kiely above his nearest opponent, Saoirse Nic A’Bhairde. Therefore both RON and Kiely have been eliminated.

Bring on the second count. 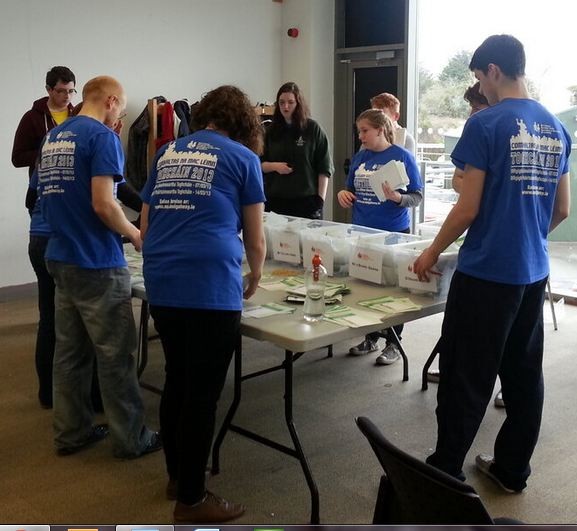 The results for the referendum are in. There were a total of 3596 votes, with 142 of these spoiled. This brings the total valid number of votes to 3454. If there was a quota in the referendum, that quota would be 1728.

This means the referendum has been passed and that the Students’ Union will take a Pro-Choice stance on Abortion.

And the final count is in. Using the transfers from Mark Kelly and Kevin Kennedy, we now have the final results for the position of Vice-President for Education and they are as follows:

As neither candidate has reached the quota, the lowest candidate has been eliminated, deeming Catherine Breslin the Vice-President for Education.

It has been an exciting count so far, with RON and Nolan’s votes transferred to the other candidates.

The results of the second count are as follows:

No candidates have reached the quota yet, meaning there will be a third count. The number of votes given to the last candidate, Mark Kelly, is not enough to bring Kevin Kennedy ahead of Thomas McConigley. Therefore both Kennedy and Kelly will be eliminated for the next count.

This means the race is now between McConigley and Breslin. It’s tight. Will McConigley catch up with Breslin, or will she keep the lead? It’s hard to say.

At the moment, the count for Education Officer is ongoing.

This year brought the highest ever number of votes, with 3635 people having their say. 92 of those votes were spoiled, leaving 3543 valid votes. Therefore, the quota for this year’s election is 1772 votes.

The results of the first count are as follows:

As none of the candidates reached the quota, there will be a second count, eliminating the candidate with the lowest number of votes. In this case, that’s RON. However, as the number of votes that went to RON is not enough to bring Conor Nolan above his nearest opponent, Mark Kelly, this means that both RON and Nolan have been eliminated.