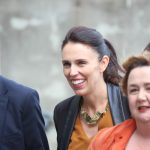 By Martha Brennan In the wake of the shock felt by millions after 50 innocent worshippers were gunned down in New Zealand on March 15, the name that is on everyone’s lips is not that of the Australian gunman, but of New Zealand’s Prime Minister Jacinda Ardern. Ardern, who at 38 years old is the country’s youngest Prime Minister, has been praised around the world for the … END_OF_DOCUMENT_TOKEN_TO_BE_REPLACED