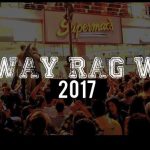 RAG week is a tradition amongst most colleges. Traditionally a week of ‘raising and giving’, the Students’ Union and students themselves would help charities out through events such as on campus gigs. In 2011, the SU of NUI Galway voted to scrap RAG week, on the basis that five concessions would be made by the college. According to an RTE article at the time those five … END_OF_DOCUMENT_TOKEN_TO_BE_REPLACED