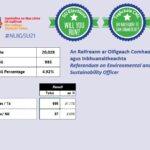 A referendum on the appointing of an Environmental and Sustainability part-time officer has been passed with an overwhelming majority of 898 votes for, and 87 votes against. Another referendum, this time on the appointing of an Independent SU Council Chair, instead of a student being voted into the position, was passed with 427 voting in favour and 246 voting against. All … END_OF_DOCUMENT_TOKEN_TO_BE_REPLACED