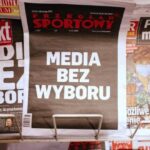 By Ewelina Szybinska The Polish government has announced a new advertisement tax is set to be imposed on non-state media organisations in early July of this year.  The move has led to outrage among independent media organisations in the Eastern European nation and has led to the foundation of the “Media Without Choice” movement, which has been backed by … END_OF_DOCUMENT_TOKEN_TO_BE_REPLACED