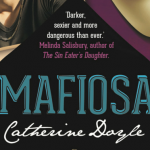 Former NUI Galway student and Galway native Catherine Doyle (26) launched her third novel Mafiosa, in Easons on O’Connell Street on 13 January. Mafiosa is the third, and concluding work, in Doyle’s Blood for Blood trilogy. Vendetta, the first in the series, was published in 2015 and met huge success when it came out first. It was followed shortly after by the second … END_OF_DOCUMENT_TOKEN_TO_BE_REPLACED