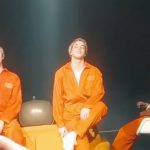 By Daniel Brennan  After exploding onto the rap scene in 2017 with three of the most critically - acclaimed albums of the year in SATURATION I, II and III, along with their trademark music videos and their defining shunning of norms associated with a group that willingly calls itself a 'boyband,' 2018 has been a year of growth for BROCKHAMPTON. Former member Ameer Vann was … END_OF_DOCUMENT_TOKEN_TO_BE_REPLACED