Use a capital for…

The name of a committee.

Days of the week, months and holidays.

Don’t use a capital for…

A title that is preceded by “the”, i.e., the president, Mary McAleese, or a title that follows a name.

Non-specific use of the word “god”.

Headlines should not feature a capital letter in every word, i.e., Late grants cause student hardship.

Collective nouns should always be singular, e.g. The Government has…, The staff is…, The Students’ Union is… If you are referring to a collective’s constituents, use the plural, e.g. The council are at sixes and sevens, The staff are at each other’s throats.

Colons should be used after a statement which precedes a list, e.g. His basket is full of fruit: apples, pears, bananas and plums.

A couple is two. A few is ‘a small number of’, usually three or four. Several means more than five. A dozen is 12.

Prefer their to his or her. Where the sex is not stipulated, use “their”.

The names of ships and aircraft, e.g. The Titanic.

Foreign phrases. e.g. “We found ourselves in a cul de sac.”

Emphasis. Capital letters should never be used for emphasis.

Avoid using jargon or slang. It is generally used to express a simple term in a more complicated way. Simple and normal language is always best.

Numbers from one to one ten must be written as words, except when used statistically. Numbers from 10 and upwards must be expressed as figures.

In the case of a set use digits for all. e.g. He asked for 9 soldiers and received 99.

Use figures for volume, part, chapter, and page numbers.

Figures are also used for years, including those below one hundred.

Numbers at the beginning of sentences and approximate numbers should be expressed in words, as should ‘hundred’, ‘thousand’, etc., if they appear as whole numbers:

Do not add an line of return between paragraphs.

Percent should be expressed written as ‘eight percent’, ’10 percent’, etc.

When quoting someone, always take their words verbatim: write exactly what they said. If a lengthy quote veers off the subject you may use an ellipses […] to remove irrelevant information.

It is very poor form to quote someone out of context.

Single quotations marks can be used for terminology, e.g.  Though referred to as a ‘professor’, Mr Smith never in fact completed his PhD.

In Sin, we use semi-colons when introducing a quote or statement, e.g., She stated; “This style guide provides some essential information.”

A semicolon is used to connect two independent clauses which are related.

Times must be expressed numerically and followed by “am” or “pm”.

The first mention of a person in an article must include their title. They can then be referred to as Mr, Mrs, Ms, etc., on each subsequent mention, e.g. Mr Obama. 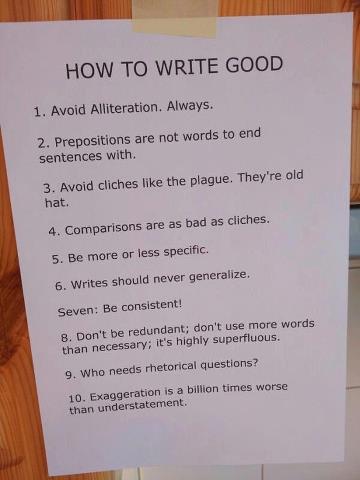