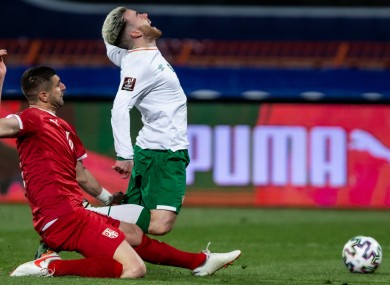 There were signs of improvement from Stephen Kenny’s Republic of Ireland team in their 3-2 defeat to Serbia in Belgrade, however come the full-time whistle in the Aviva stadium with a 1-0 defeat to Luxembourg to make the road to Qatar an uphill battle, those feelings of enthusiasm were dashed spectacularly.

The Serbia match was one where despite losing there were encouraging signs, but they evaporated after the Belgrade clash was followed up a couple nights later with another disappointing display against an unfancied Luxembourg side in Dublin.

Luxembourg were boasting some players who have played Champions’ League football this season while others have played in the Bundesliga and Ligue 1, while the Irish side was predominantly made up of Championship players. Young 19-year-old goalkeeper Gavin Bazunu, who is currently on loan at League One’s bottom side Rochdale from Manchester City, made his debut in goal.

Chances were created for Alan Browne and James Collins, who both should’ve had a goal or perhaps two. But the Boys in Green were not clinical while Luxembourg played some nice football and threatened with a couple of half chances and speculative efforts. Ireland’s young goalkeeping debutant Gavin Bazunu looked good and more mature than his 19 years would tell you.

Ireland rued their missed opportunities, as five minutes from time Dynamo Kiev man Gerson Rodrigues took a shot early from outside the box and it nestled in the bottom corner as Luxembourg somehow took the lead at the Aviva. Ireland weren’t able to reply in time as they were left with two defeats from two to start their qualifying campaign.

A statistic which underlines the madness is that it was Luxembourg’s first away win since they beat Switzerland 2-1 in 2008 as Ireland now have only scored 3 goals in 9 games since Kenny took over last Summer.

It was a disappointing night for the Galway representatives in the squad also, as neither Daryl Horgan or Ryan Manning saw a minute of competitive action across the two games. Manning, who has impressed in the colours of Swansea in the run-up to the International break, always faced an uphill battle to usurp Enda Stephens at left back and so it proved.

Aaron Connolly did start the Serbia clash, however was ruled out for the dismal Luxembourg defeat. In his absence and with a goal vital in the closing exchanges on the Dublin turf, many would’ve expected to see Daryl Horgan sent on in an attempt to eke out the all-important result. However, Stephen Kenny instead opted for rising talent Troy Parrott.

Days earlier, there was a different sort of attitude in defeat for the Boys in Green, who were likely cursing the lack of VAR in the wake of the 3-2 Serbia defeat.

Ireland, who hadn’t scored since Stephen Kenny’s first match in charge away to Bulgaria in September, were able to miraculously open the scoring after 18 minutes through an Alan Browne header after a delightful Callum Robinson chipped cross. This was Ireland’s first true chance of the match as they were on the back foot to a Serbia side with star names such as Sergej Milinković-Savić and Luka Jović on the bench.

That didn’t matter however as Ajax star Dusan Tadić time and time again was dictating play as the Serbs mounted more and more pressure on the Irish defence. Kenny’s attempt of playing out from the back along with high pressure from Serbia led to mistakes in the Irish half and gave Serbia more opportunities to score.

The Boys in Green were to be outdone just before half-time as a Serbian goal kick landed to the former Southampton man Tadic and he slipped through in form Fiorentina striker Dusan Vlahović. Vlahović slotted it home to equalize it for the home side as it was a 1-1 tie at the break.

After a disappointing display by their standards, Serbian manager Dragan Stojković decided to bring on three substitutes in the early stages of the second half in the form of Fulham striker Alexsander Mitrović, Getafe midfielder Nemanja Maksimović and dynamic Eintracht Frankfurt winger Filip Kostić. These subs would most definitely change the favour to Serbia as they were able to attack down the left while pressuring Ireland towards their own goal and cause even more mistakes.

That said, when Ireland could break–out they looked good, even having a debatable penalty shout go against them as Galway man Connolly was tackled in the area. Perhaps with VAR a foul would’ve been given but without the technology Italian referee Davide Massa chose to just give the corner on this occasion, as Irish fans were left frustrated.

The gulf in class between the two sides however widened as the game went on and the scoreboard was reflected on 69th minute. Dusan Tadić yet again threaded a pass through out wide to Mitrović and with the Fulham man running towards the corner flag he hit an audacious chip over a suspiciously positioned Mark Travers in the Irish goal to give Serbia the lead.

The lead gave Serbia more comfort as they took a strangle hold of the match. Tadić completed a hat trick of assists as he lobbed in a cross much like Callum Robinson for the Irish goal into Mitrović and the Fulham man scored his second, becoming Serbia’s top goalscorer in the process and giving Serbia a 3-1 lead.

The Boys in Green kept looking for another goal, but you could really tell that these were a bunch of players that don’t get regular starts for their club and even if so, they aren’t playing at the Champions League quality that some of the Serbians are playing at. A consolation goal was scored however, as James Collins tapped it into an empty net to round out a 3-2 defeat for the Irish in the first match of World Cup Qualification.

Stephen Kenny’s side have now not won a competitive match since June 2019 when they beat Gibraltar 2-0 in Euro Qualifying, going 13 matches winless in the process. They will now need a result against a star-studded Portugal if they want a chance at heading to Qatar, but the odds are now against their favour more than ever

Some have come out against Stephen Kenny, but Kenny was always going to be a long-term appointment and after years of underdevelopment and underinvestment from John Delaney and the FAI, we are now perhaps having to experience the worst Irish team ever. We are at the bottom of the long mountain we have to climb again if we want to reach the World Cup for the first time since 2002 and it will take time until we reach those heights again.