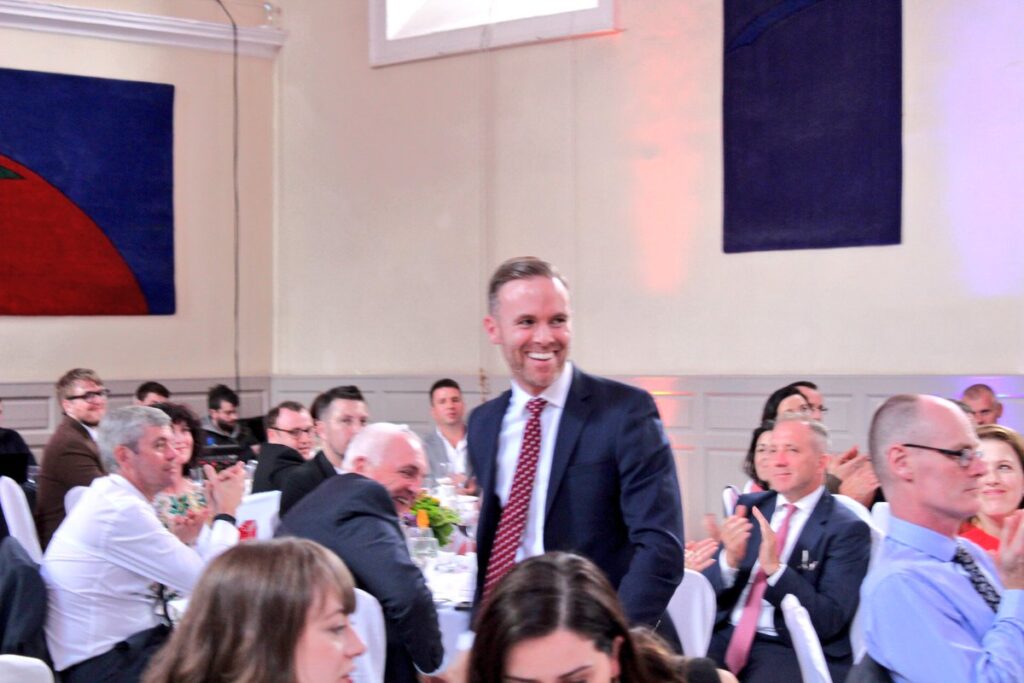 “You’re seeing history literally unfolding before your eyes, and to be able to bring that news to people is exhilarating.”

These are the words of award–winning court reporter and NUI Galway alumnus, Frank Greaney, who has forged a hugely successful career reporting on some of the most high-profile cases to come before the Irish courts in recent memory – such as the Ana Kriégel murder case, the Mr. Moonlight murder case, and the Belfast rape trial.

Frank returned to NUI Galway this month to give a webinar titled “Media and the Law” as part of the Law Society’s Centenary Celebrations, and SIN spoke to him about his version of success, the importance of his role in the justice system, and his winding career path which began as a Corporate Law student, feeling a little lost.

“I realised halfway through that it wasn’t for me. I found that I was more interested in the stories. The legal principles were very interesting, but I always wanted to know what happened next,” he said.

Taking time out to travel and write after his undergraduate degree led to a “lightbulb moment”, and the decision to pursue a career as a journalist. Unphased by a rejection from NUI Galway’s MA Journalism programme, Frank started writing for the Galway City Tribune (which he still does to this day), and fell in love with broadcasting when he was accepted onto the programme the next year.

Graduating in 2009 in the height of the recession, and unable to find a permanent job, Frank cut his teeth on the freelance circuit. “That’s when my degree came in really handy. I was able to go down to the courts, spend my last couple of quid on a laptop and a recorder, and I just started following stories,” he said.

Gambling that last couple of quid paid off, as Frank has become established as one of the top court correspondents in Ireland, now broadcasting the latest news for Newstalk, Today FM, and many regional stations.

With a recently published book “Crowded House: The Definitive Story Behind the Gruesome Murder of Patricia O’Connor”, and a three-in-a-row streak at the Law Society Justice Media Awards, Frank is not short of tangible evidence of his success. But what matters more to him is the importance of telling these stories, for both the public, and the people involved.

Frank believes court reporters also provide an important platform for the loved ones left behind. “During a trial all you can do is tell people what’s happening on a given day, but afterwards you can begin to tell the victims’ stories. For some families who are left behind, that’s a really important platform for them to have.” He mentions section 252 of the Children’s Act, which protects the identities of child victims in criminal proceedings, but also inadvertently robs families who have lost children in violent circumstances of the opportunity to share their stories publicly.

“When that platform is taken away from a person, that’s when you realise how important it is to report on these cases. It gives people a voice and a platform where they might not otherwise have one.”

“It does make me feel a little bit uncomfortable accepting accolades on the back of these tragic stories that I’ve covered, but equally I think they’re important stories to tell and it’s important to do that respectfully.”

Covering “stories that would make your skin crawl” as a nine to five would weigh on anyone, but Frank has some positive takeaways. “Seeing and writing about that kind of cruelty day in day out, listening to someone talking about how much they miss someone, how much they loved them, and how precious life is, it gives you a better appreciation for the people who around you and the people and things that really matter.”

Frank also has these words of wisdom for NUI Galway students in particular:

“When I was a student at NUI Galway, I was a young fool who felt a bit lost and really had no idea what he was doing with the rest of his life. Just because you don’t know what you’re doing with the rest of your life now, doesn’t mean you won’t figure it out along the way, and half the fun is getting on that path. My one piece of advice is, you’re in a fantastic university, you’ve been given every opportunity, if you’re feeling a little lost when you’re leaving don’t despair, because things have a funny way of working themselves out.”