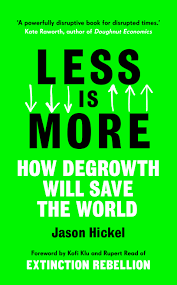 Less Is More is a book by economic anthropologist Jason Hickel. It examines the reality of climate change in the world today and tackles the true root of the problem: Capitalism. This book explains that if we truly wish to overcome the largest issue humanity has ever faced, that there is only one solution and that is degrowth.

Capitalism is run on the concept of perpetual economic expansion, but the consequence of this is that it will never be enough. There is no end point to capitalism, there is no moment when giant corporations say, “Okay, that’s enough money, time to restore the amazon”. If we wish to restore the planet and save it from utter destruction, we need to find balance and that balance is diametrically opposed to the values of capitalism.

These are the concepts that Hickel outlines in his book, offering statistics and examples that would shock and appal even the most staunchly conservative yuppie. I would recommend this book to absolutely anyone wishing to educate themselves on the climate crisis and what can be done to prevent it. This book is important because it firmly places blame on those who are the root cause of the issue and clearly demonstrates that the only way to change things is if we all come together collectively and say, “no more!”.

This book presents consumers as victims of capitalism who have no choice but to unwittingly participate in ecological destruction. While it is important for individuals to try and live a sustainable existence, the average person’s carbon footprint is not even a drop in the ocean, compared to the damage being done by corporations and governments in the name of capitalism.

This book shows us that there are alternatives out there, there are different ways we can live in this world without doing harm to it, and the result will be a freer, happier population. If we shift our perceptions from one based around profit to one based on necessity, we can eliminate waste and even reduce the need for gruelling work schedules and pointless stress.

Less Is More explains how GDP, the measure through which countries calculate their economic progress, is inherently flawed. It does not measure happiness or sustainability, it does not measure the millions of hours of unpaid labour such as domestic or care work that keeps our societies going. It merely measures profit for profits sake, without any thought given to the deathly consequences. If an alien were to observe our planet from outer space and was able to see the rationale behind some of the systems that we have in place, they would not be able to comprehend how we have all the information in front of us, but somehow still follow these farcical systems. This book expertly shines a light on these absurdities and leaves you baffled about how it has been allowed to go on like this for so long.

Hickel shows us that even though the current system of the world seems unchangeable, it has not always been this way. Before the advent of capitalism there was still exchange. People bought and sold things. People still produced products. However, the philosophy underpinning this was that the product should be useful and not that it must make money regardless of its use or not.

One of the most powerful examples in the book shows how even though capitalism is presented to us as the most efficient economic system, it is by design inefficient. Under capitalism things are not built to last. The goal is to keep people buying, and to keep people producing waste. This is good for business but terrible for the environment.

The way this is achieved is through something called planned obsolescence. This is when products are designed with the express purpose of being obsolete after a certain pre – determined amount of time. Apple is particularly bad for this, making your IPhone run slower after each update, convincing the consumer that they need a new phone every two to three years. In the USA, approximately 151 million phones are discarded each year, amounting to 17 tonnes of copper waste. This waste is entirely unnecessary, it is built into the design of the product itself.

Jason Hickel discusses all these issues and expands on them much further in Less Is More. Whether you are a long – time activist or completely oblivious to the issue of climate change this book will teach you something. The world does not have to be the way it is, people do not have to suffer under capitalism as they do, and the prevalence of ecological destruction and natural disasters that we see increasingly in the world today can be stopped. We must all come together to inform ourselves and demand change. The powers that be may say growth is the only way, but this book shows us that the alternatives are more desirable for everyone. [5/5 stars]