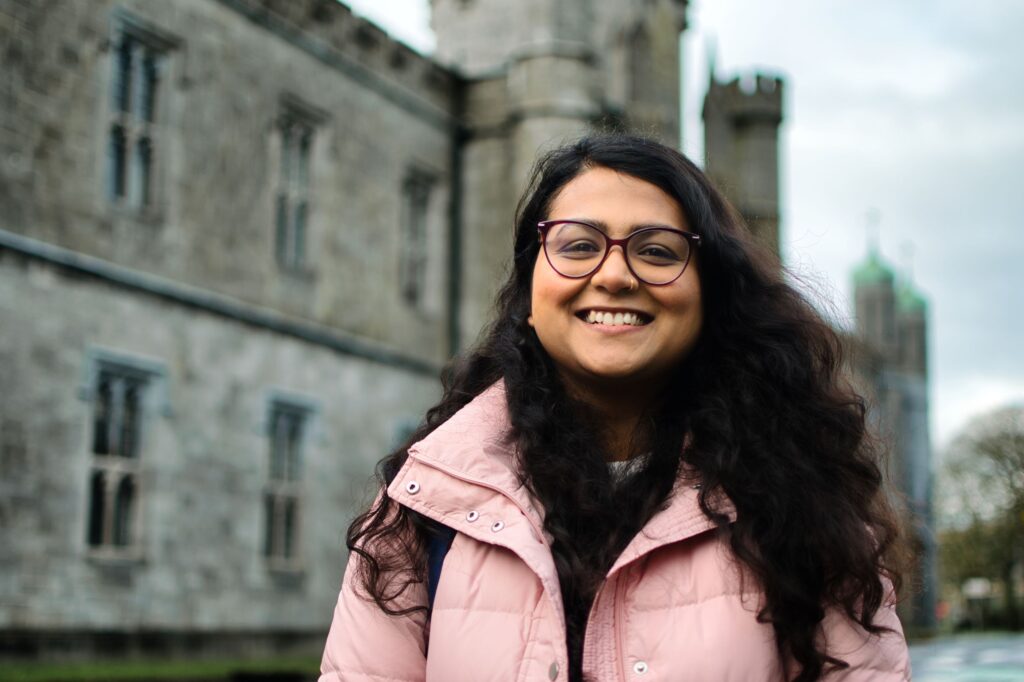 NUI Galway student, Sukanya Saikia, will travel to Antarctica, along with 80 other dedicated climate fighters and environmentalists.

They are acting as Climate Force Ambassadors for the upcoming International Antarctic Expedition in November 2021.

The expedition, which is being organised by the 2041 Foundation, is to train and inspire young leaders in up-to-date climate change, sustainability, and clean energy skills, and to provide a platform to engage in discussion and exchange ideas with world-class climate and sustainability leaders and help build strong collaborations.

Sukanya is a PhD student in the discipline of Civil Engineering, and her research investigates the climate change and urbanization impact on wastewater management systems.

She could not contain her excitement upon hearing the news that her application had been accepted.

“I was jumping so much, and my housemates were very confused! I didn’t tell anybody beforehand because I thought it was a far-off dream. I might not have been selected so I didn’t want to get my hopes up.

“I told my mom and my sister and, without asking me, my mom posted on Facebook about it! She was so happy; I hadn’t told anyone else at that point. The post went viral, in my community back home in India especially, and then the media got involved. It was crazy, I got so much media attention, that has never happened to me in my whole life”.

Her passion for climate change came not from an individual, but her home and her upbringing as a child.

“I didn’t know the science behind it before, but I was aware of it. I come from Assam in India, where there are a lot of floods, and every year it gets more intense. I have seen people dying, I have known people who have died. It has had an impact on me, so I was always interested in the environmental side of it.

“In India, we never waste food, we have to respect it. Indian mothers are very strict about that! If we got a plastic bag, we would save it under the mattress. We have always been like that, but with time people have changed, and plastic has become so much more available.

“After studying it, I got to know the scientific side of it, and then I got involved in projects which were climate change related, and obviously I became more and more passionate”.

Her interactions with people on the ground have shaped how she wants to spread her message, not only in academic communities but to the public as well.

“For one of the projects I was involved in with the University of Southampton, I got to interact with tea garden workers. They had a lot of field knowledge after years of work, but they didn’t have that scientific knowledge about climate change. They couldn’t relate to it, they’re not literate people. I got to know how much their lives have been affected by it.

“There’s an attitude that if “you’re studying it, it’s your problem!” so I think that’s the main challenge”.

To venture off to Antarctica, Sukanya must raise funds through crowdfunding and sponsorship,

“I have been contacting corporates, but I think it’s difficult in Ireland. I’m an international student and I think they prefer Irish students, so they aren’t getting back to me.

“I have to pay in instalments. I paid the first one with my savings, but I don’t know what I’ll do for the next one. I asked for an extension and the organisers were supportive of that, but the pressure is still there. The next instalment is around $5,000.

“Everything included is around $20,000. I’m trying to raise it in smaller funds. I’m a student myself so I know the limit of each person. I want to convince people that it’s not just for an individual, it’s for everyone, it’s beyond you and me”.

Robert Swan founded the 2041 Foundation and his original expedition to the South Pole was the inspiration for the organisation. Swan has dedicated his life to the preservation of Antarctica through the promotion of recycling, renewable energy, and sustainability to combat the effects of climate change. Their mission is to engage businesses and communities on the climate science, personal leadership, and the promotion of sustainable practices.

“This is a great and a very exclusive opportunity for Sukanya. It will allow her to experience first-hand the effects of climate change on the fragile ecosystem of Antarctica. It aligns with her PhD research and will give her a broader perspective on climate change, and I look forward to hearing from Sukanya about her experiences when she comes back”.

To find out more about Sukanya’s journey, or to support her with the expedition, visit her GoFundMe page at gf.me/u/zfzq2c