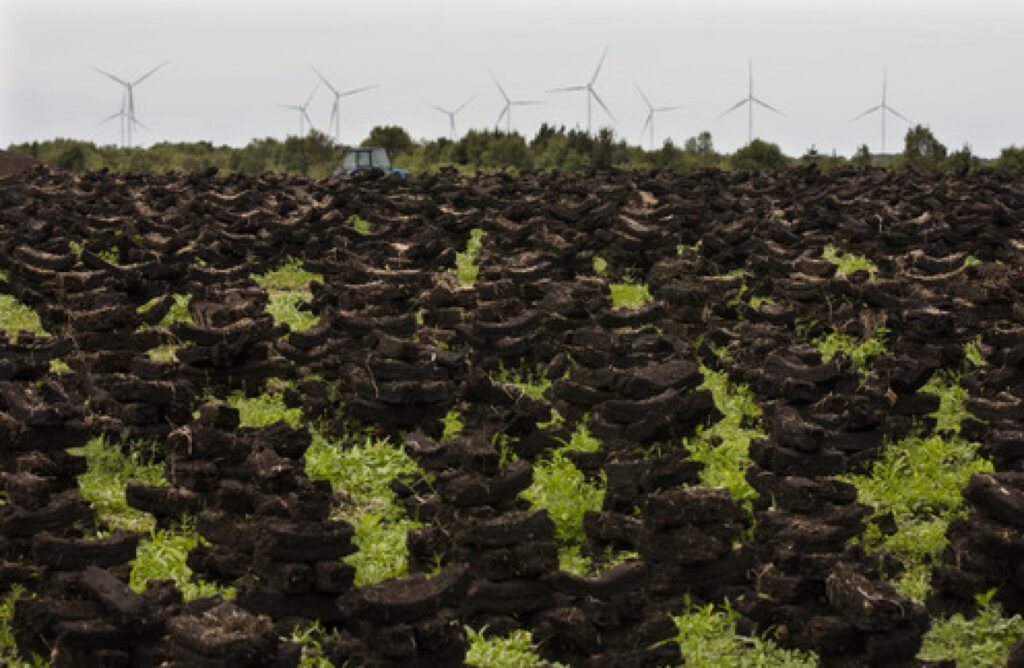 Bord na Móna, the partly state-run energy board which was established to develop Ireland’s vast bogland into a profitable resource, has recently secured a €108 million state investment. The ‘Peatland Restoration Plan’ will also be boosted by a further €18m from within the company as they seek to meet their target of completely ceasing peat-based energy production on their bogs by 2030.

The operation shall see 80,000 acres of the midlands being returned to a more natural state as peat cultivation stops, with the hope of a huge increase of biodiversity. Turf was still used in large scale energy production up until December 2020, which saw the closure of all three-remaining peat-burning plants, the Lough Ree plant on the Longford-Roscommon border, the West Offaly plant, and the Shannonbridge Plant in Offaly near the borders of Galway and Roscommon.

Peatlands cover roughly 3% of the world, however their mass accounts for 30% of the world’s carbon storage. Roughly 12 million hectares of Ireland’s landmass is bog so it makes sense that peat has established itself as our nation’s fuel.

Peat harvesting has been damaging bogs here since the 15th century when an ancient policy called ‘turbary’ enabled the population to cultivate bog for domestic use as turf was the essential source of fuel for heating and cooking. Over-farming of bogland also added to the degradation. However, it was in 1946 with the formation of Bord Na Móna that large-scale mechanised cultivation began, stimulating local economies and reducing the nation’s reliance on imported fuel, whilst also seeing Ireland draining the indigenous fuel source faster and on a larger scale than ever.

This became increasingly problematic as scientific research led us to realise carbon is an essential to our existence on this planet. Since the industrial revolution we have burned through the previously untouched fossil fuels at an exponential rate. All this carbon had been kept undisturbed in the earth for millions of years, supporting plant and animal life and balancing our global temperature. It holds in the energy that we get from the sun. As it depletes our and every living-thing’s future on this planet becomes more uncertain.

Rewetting 80,000 acres of bog is a cause for environmental celebration, however, despite the huge investment and EU-support, the facts and figures do not include an actual detailed plan for how the process will be carried out, as is often the case with lofty initiatives. The ICMSA (Irish Creamery Milk Suppliers Association) chairperson Denis Drennan vocalised the concerns from private farmers who, in mid-January 2021, demanded clearer information on the execution. Later in the week IFA president Tim Cullinan said they met with Bord na Moná and received a commitment that the rewetting process would not affect nearby farmland.

Farming is hit the hardest in Ireland and across Europe when it comes to new environmental legislation. Food production and farming in general has always required tools and methods that are significant sources of carbon dioxide and other damaging greenhouse gases. The vehicles required are often old, inefficient and heavily used. Huge areas of land need to be dug up and deforested, and heating, lighting, ventilation and the huge amount of feed required for the animals all contribute. The animals who are reared in these environments then in turn cause the huge release of methane into the environment. Livestock farming alone accounts for 37% of global methane emissions.

It, in many ways, makes sense that the initiatives come down hard on the industry, despite the culpability for the predicament being shared by all EU citizens. The bog rewetting scheme could still cause harm despite the IFA’s assurances. Roads important to the farmers in the midlands will almost certainly have to be removed and grown over, and the guarantee of safety to adjacent farms does not seem to come with any detailed, long-term, study-based evidence.

However, as with most long-term initiatives COVID-19 has put this on the backburner for the time being. Farmers and environmentalists will remain equally curious about how we will see this ambitious redevelopment shape Ireland.