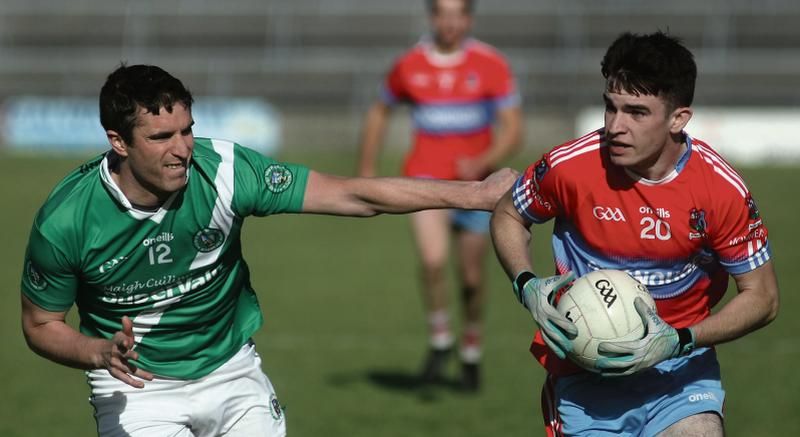 Maigh Cuillinn CLG made history recently, as they powered to a 2-12 to 1-11 victory over Mountbellew-Moylough in the Galway Senior Football Final.

It is a win which is the crowning moment in the 106-year history of the club, as it is their maiden county crown, and the first time they have secured that the Frank Fox cup. headed out the N59 to Phairc Mhaigh Cuillinn for the first time.

The first half of the clash was nip and tuck, and neither the men in green or their counterparts from East Galway could lay claim to the lead as Austin O’Connell blew the half-time whistle.

The game was on a knife-edge until the fixture entered the final quarter, when NUIG student Conor Bohan came up with the goods for Maigh Cuillinn, producing a three-pointer in the 45th minute.  To the credit of Mountbellew-Moylough, they refused to let the hammer-blow affect their psyche and their heads refused to drop.  However, the lead always looked like it was insurmountable, and so it proved.

Dessie Connelly was imperious on the day, and a couple of scores late in the day ensured that it would be him who was laying hands on the Frank Fox cup, in a historic day for all from Maigh Cuillinn.

The result was especially striking from an NUI Galway perspective, with 13 members of both the management and backroom teaming having been involved with University in years gone by.

The most notable was the captain of the winning side and Man of the Match on the day Dessie Conneely. Conneelly, who was named at corner-forward, was in totemic form on the day, notching a barnstorming 1-9 of his side’s 2-12 tally and causing plenty of headaches for the Mountbellew-Moylough rear guard.

The wily forward pounced to score a fine goal only moments after the re-start and surely caught the eye of Galway bainisteoir Pádraic Joyce as he looks to stay at the summit of the Allianz League Division One table.

It was a side with a massive NUIG backbone, as every single score on the day for the kingpins came from one of the college’s alumni.  As well as Conneelly’s monstrous tally, Bohan chipped in to raise a green flag, while Owen Gallagher bagged himself a brace of points and Gareth Bradshaw got in on the act from corner forward with a solitary score.  Neil Mulcahy and Aidan Claffey also started for Maigh Cuillinn in defence. While bainisteoir Don Connellan also boasts NUIG connections.

Cathal Clancy was also a coach in the backroom team, while Sean Kelly, Paul Kelly and Fresher coaches Diarmuid Lee and Niall Walsh were all panellists.