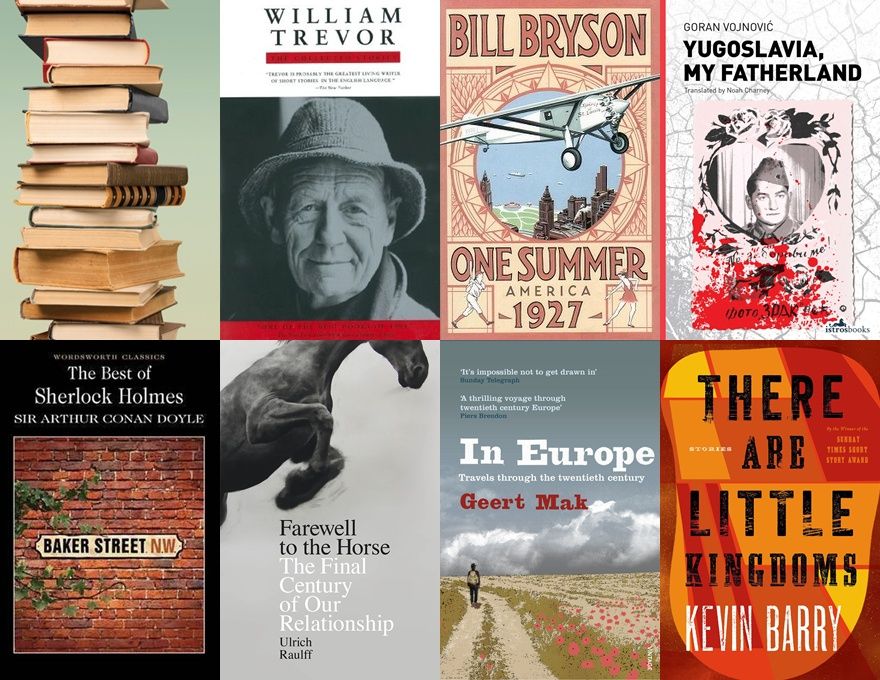 One of the better aspects of having lots of time on our hands is being able to get a bit more reading done, and finally being able to start that book we’ve always wanted to read. So, from my own little enclave of isolation, I’ve perused my shelf to pick out a few books that might get you through the period, from dark tales of desperate times, to short stories and easy reads, all are entertaining and, better still, all can be purchased online without having to leave the house!

There are Little Kingdoms by Kevin Barry

Barry has since gone on to write further books but this was his first; a brilliant short story collection that won the Rooney Prize for Literature in 2007. It’s modern Ireland with a farcical, odd and dark twist. From the comedy and tragedy of a cheating farmer in ‘Animal Needs’ to the unforgettable atmosphere of a rural teenage summer in ‘Atlantic City’, ‘Kingdoms is a classic that will leave you thinking, and wanting more.

Yugoslavia My Fatherland by Goran Vojnovic

Before I’d read this novel, I was lucky enough to meet the author, and when I read it I realised that meeting was an honour indeed. It is one of the greatest books I’ve ever read, being as it is a fascinating and atmospheric insight into a family and a nation at a great turning point in their history. The opening scenes, of a mother, father and son wandering aimlessly through the streets of Belgrade, is unforgettable in its depiction of a country about to change forever.

The Best of Sherlock Holmes by Arthur Conan Doyle

If you wish to be completely distracted for an hour, the short stories of the Victorian sleuth are faultless in their scene setting, mystery, intrigue and thrill. Their popularity shouldn’t be mistaken for simplicity, for one of the great aspects of Holmes himself is the dark edge of his substance abuse, which elevates the tales to something like noir. His arch nemesis, Moriarty, rarely shows himself, making his limited appearances all the more explosive. There’s a reason Sherlock Holmes is always in print.

In Europe by Geert Mak

In 1998 the Dutch journalist Geert Mak travelled around Europe writing a diary entry every day for a year for the Dutch newspaper NRC Handlesblad. It was a report from all the nooks and crannies of major incident in the twentieth century; from Dublin to Istanbul, Ypres to Chernobyl, by way of Lourdes, Dunkirk and Bucharest. Full of insight and an easy read, it’s my favourite and most battered book!

The Collected Stories by William Trevor

Trevor’s position amongst the Irish greats has never been front and centre, but just off stage. And it’s there he stands alone, his stories peopled with outsiders wandering the Ireland and England of the past two hundred years. From the butler and cook of an Irish Famine estate, to a northern Protestant family torn asunder by their wayward son’s conversion to Catholicism, Trevor’s dark tales accomplish genius more by what’s not said than what is. A peerless writer. An essential read.

Farewell to the Horse by Ulrich Raulff

Far from a book about agriculture or sport, this epic history about the animal that has, in fact, been man’s best friend all along, rightly won The Sunday Times History Book of the Year in 2017. A rich tapestry that spans art and conflict, metaphors and nightmares, Raulff’s ‘Horse is an ode to the animal that was omnipresent in everyday life up until the last century. Eight million of them lay dead across Europe during the First World War, but it’s a quote from the writer Ryszard Kapuściński about their fate during the Second that left its mark on me: ‘There they lie, with stiff legs stretched up to heaven, shaking their hooves at the world’.

One Summer, America 1927 by Bill Bryson

Chronicling a single season in the USA, this book is a tale of loosely connected anecdotes and milestones that beautifully captures a moment in time and will leave most readers wondering why more ‘history’ books aren’t written like this. Of course, it’s all about the teller of the tale, and Bryson is a brilliant raconteur. He leads us from the first trans-Atlantic flight of Charles Lindberg, to the escapades of crime-lord Al Capone, by way of baseball, boxing, radios, cars and film. He’s also unafraid to lead us down dark alleys, with tales of racism and murder giving the whole thing a nice edge. A rich and memorable yarn, One Summer is ultimately uplifting and optimistic. It’s the kind of book we all need right now.