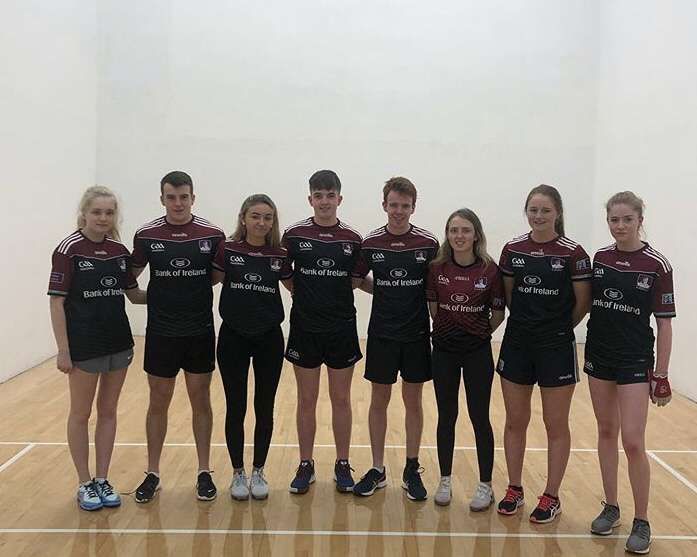 NUI Galway’s Handball club recently took part in the 68th USHA Collegiate from the 19th – 23rd of February in the University of Texas, Austin. Eight members from the club travelled across the Atlantic to take part in the collegiate competition, which saw almost 52 students from Irish Universities and Institutes of Technology such as UL, DCU, CIT and LIT take part. The students who went from NUI Galway were Ashling Mullin, Sean Hession, Eleanor Percy, Laura Finn, Kelly Curran, Fiachra Mulkerrins and Paul Conneely. The trip was mostly self-funded, but NUI Galway’s Sports Department and Delight, the café located in the Kingfisher gym, helped sponsor those who were representing the college. SIN spoke to co-captain of the club Ashling Mullin, who took part in the last year’s competition in Minnesota with Eleanor Percy, about how this year’s group got on.

“The tournament format is very similar to the Intervarsities we have here in Ireland”, Ashling explains over the phone. “Everyone is guaranteed three games – you’re seeded at first and put into your group for the first and second round, and by the time your third game comes around, you’re distinguished into your proper grade. From the third game onwards, it’s knock-out!”

The co-captain says she likes this competition format. “It helps determine your grade and you find yourself playing challenging games throughout the tournament. It’s also great going on these trips with your University because the handball community is small. Everyone knows everyone! It’s like living in a small town– so when we go on trips like these, we all get along”.

Ashling also thinks these types of tournaments are great for networking and making friends. She recalls the 40×20 Intervarsity in Ireland at the start of February, when people from Texas travelled to Ireland. “We get to know a lot of Americans who study in different Universities in the (United) States. Handball gives us so many opportunities and makes the world seem small. For example, we had seven Americans taking part in our annual 40×20 Intervarsity two weeks before we flew out to their collegiate in Texas! We love going over to the States and they really enjoyed their trip to Ireland to see our facilities and where we train!”

She also thinks the facilities in Texas were unbelievable. “You have ten courts side-by-side in one venue. The next venue ten minutes away would have the same and a show court with three glass walls. It’s like a handball heaven!”

The NUI Galway handball club had a very good tournament, however, a lot were unfortunate enough to lose out in the semi-final stages. “Fiachra Mulkerrins & Paul Conneely had an outstanding tournament in the A grade Doubles, they lost out in a 11-10 tiebreaker of the Semi Final,” Ashling says, proud of the club. “I myself lost out in the 9-16 Open Play Off Final, but overall, I was happy with my performance.” Ashling continued to say that Kelly Curran won out the Ladies A tournament, the only of the eight to win a competition. “She’s been playing extremely well this year and it was one hundred percent deserved!”

The team travelled home on the 26th of February, and despite working hard for the competition, got to see a bit of Austin while they were over there. “Wherever you go, it’s good to go sightseeing! We landed over a few days before the tournament and we had the afternoon to go and explore after our training in the mornings. It was a brilliant trip,” she concluded.