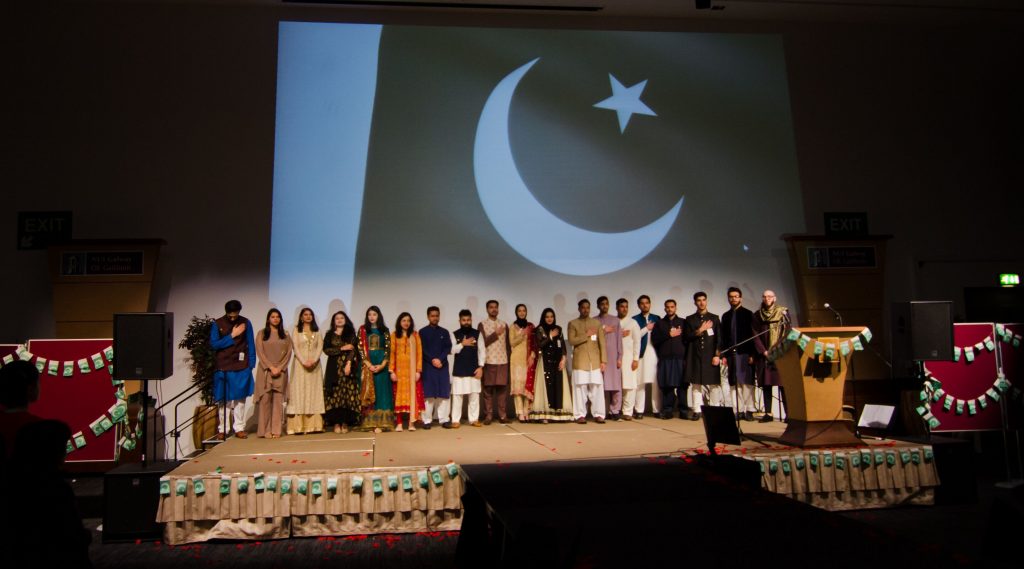 By the Pakistani Society NUI Galway

The 14th of February was greeted with buzzing excitement for Pakistani Cultural Night 2020 in the Bailey Allen Hall, NUI Galway. With dazzling music, performances and Pakistani cuisine, this was one of the biggest annual events organized by NUIG Pakistani Society.

As soon as you entered, you could see the Bailey Allen Hall decorated with the national colours of Pakistan. White tablecloths, with green and white balloons, strewn with rose petals and adorned with green ribbons. The stage was bordered by Pakistani flags completing the theme of the night. The conversations, coupled with Pakistani music playing in the background, created an energized ambiance.

The event kick-started with a rendition of the Pakistani National Anthem by the committee and volunteers, reminding us of the spirit of Pakistan.

Kids from the Pakistani community in Galway then performed an enthusiastic dance on the patriotic song, ‘Joshe-e-Junoon’.

As the night continued, the first dance performance on ‘Haye Dil Bechara’ bought energy on the stage. Next up was the Fashion Show. The crowd hushed in anticipation as the lights were dimmed with the stage and the ramp lit up. As the first beat of the song played out, participants walked the stage in various choreographed formations and rounds to the rhythm of the songs. The clothes were a mixture of conventional and present Pakistani attire to allow for a blend of modernity and traditionalism.

Enthusiastic energy was bought on by the boys as they danced to the upbeat moves of ‘Desi Thumka’. The girls captured the essence of the music through their dance on ‘Chalawa’. The dancing styles were choreographed to convey the story of the music, staying close to the cultural roots of Pakistan.

A comedy skit was performed, and all participants acted in their character’s roles, showing the dedication put in the skit. It was met by laughter and cheers from the audiences, adding to the already vibrant atmosphere within the hall.

The curtains finally dropped on the main events as it was time for the much-awaited food, including everyone’s favourite biryani, curries, rice, chicken roasts. The snacks included Gol Gappay. For dessert, there was Zarda, Ras Malai and Gulab Jaman.

The huge participation from the people contributed to the success of the event. Students from other colleges such as GMIT and GTI were also involved.

A token of gratitude was given to our sponsors; Bank of Ireland and NUI Galway International Office, with Louise Kelly and Prof. Becky Whay honouring the event in attendance. This event marked the dedication and commitment of Pakistani Society Committee of 2019/20 and the Volunteers.

Pakistani Cultural Night was a success as it entertained the audiences and gathered the community while celebrating the colourful culture of Pakistan which was the main aim from the start.