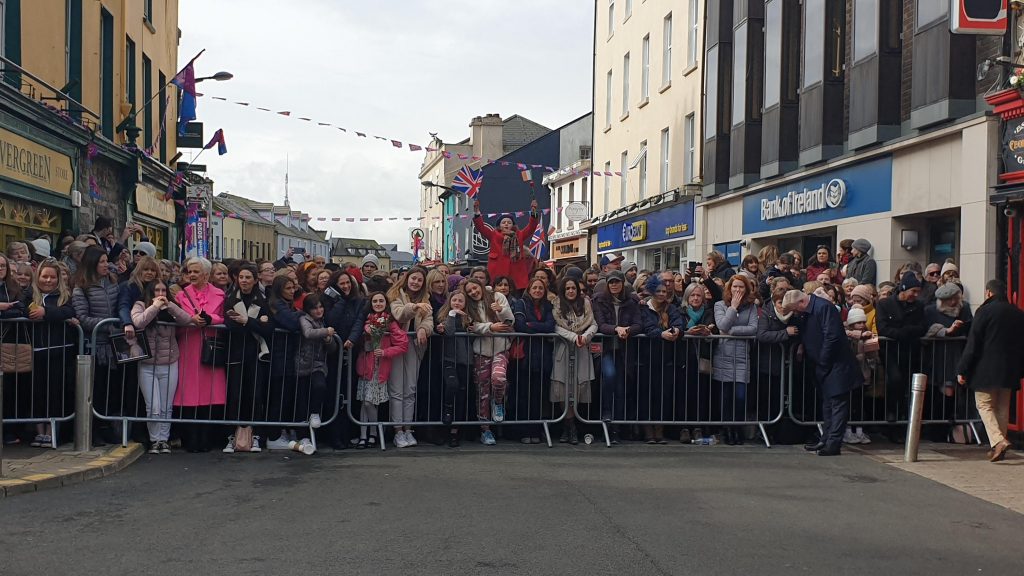 The Duke and Duchess of Cambridge recently completed their royal visit to Ireland with a trip to Galway City on Thursday, the 5th of March. Prince William and Kate Middleton visited Dublin in the first two days of their trip, before getting a helicopter ride over to Galway. Despite a delay in the morning due to heavy fog, the royal couple arrived in Galway at around 11am and began their day by attending an exhibition organised by the Galway European Capital of Culture 2020 in the Tribeton. Here, the Duke and Duchess were greeted by the Minister for Culture, Heritage and the Gaeltacht Josepha Madigan, while CEO of Galway 2020 Patricia Philbin guided the pair through the exhibition.

The emphasis of Prince William and Princess Kate’s visit to Ireland was to promote youth work, and at the exhibition in the Tribeton, they were provided with music from NØÖV- a five–piece youth collective which was discovered by the Galway 2020’s live feed initiative. Hoops also put on a basket display whilst the Duke and Duchess of Cambridge discussed a linguistic art project celebrating endangered maritime words and place names in coastal regions, i.e. Galway, Mayo, Sligo, Donegal and Scotland, with Manchán Magan as part of Sea Tamagotchi – an initiative where people are invited to keep these words alive, much like the toy, Tamagotchi.

Prince William then showed off his juggling skills, with a cue from Galway Community circus. Before they departed the Tribeton, their royal highnesses were also shown a performance from the Galway Community Cast – a group of drummers that were formed ahead of Galway 2020’s official opening at the start of February.

The Duke and Duchess of Cambridge then headed into the city centre, where they visited the famous traditional Irish music pub, Tíġ Ċóilí. They were greeted by Cóilí Ó Flaithearta and his wife Monica, along with their son Aonghus who currently manages the pub. Will and Kate were presented with a set of Waterford Crystal glasses with Tíġ Ċóilí engraved on them, along with a bottle of rare Midleton Whiskey from Galway County Council.

The couple were then entertained by a traditional Irish music session led by Ronan Ó Flaithearta on the fiddle, Conor Connolly on the box and Pádraig Ó Dubhghaill on guitar. Aonghus Ó Flaithearta was delighted at having the royal couple visit the pub, which this year celebrates its 20-year anniversary, and said “If they didn’t have royal titles, they’d be ordinary people. I was very honoured to have them here – nice people, really engaging and completely interested in what was going on around them. They were lovely. William asked me who I supported in the football, and I said ‘Liverpool’- he laughed and said I have nothing to worry about this season anyway”. 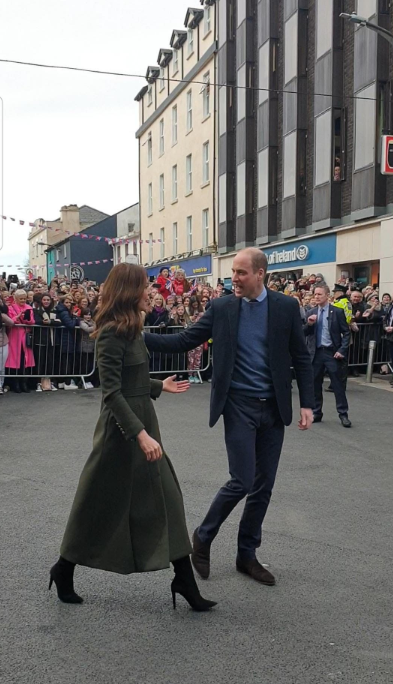 An NUI Galway student, Erin Shimizu from Roscam, was also on the guest list for her volunteer work with children who have intellectual disabilities. She met with the Duke and Duchess before they headed outside to speak to some local school children from St. Pat’s Primary school, along with members of the public who had been queueing since 7am to catch a glimpse of the famous duo. William and Kate then concluded their visit to Galway when they headed out to Salthill Knocknacarra GAA club, to learn more about Gaelic games and get lessons from the children involved in the club.

At the club, the Prince and Princess were met by former Dublin footballer Bernard Brogan and Galway footballer Emma Madden. They received a tour of inside the club house before coming out onto the main pitch where kids were playing football matches. The club owners explained how the sport worked, and then William and Kate took part in football drills with the children who were there. They then competed in a hurling shoot out with the children – a boys versus girls’ team – before Kate’s team was crowned the winner. They were then gifted with club jerseys for their own kids, along with a sliotar, a hurl and a football. The Duke and Duchess then received a guard of honour as they left the club, along with cheers from the general public who had gathered outside to witness the couple’s departure.