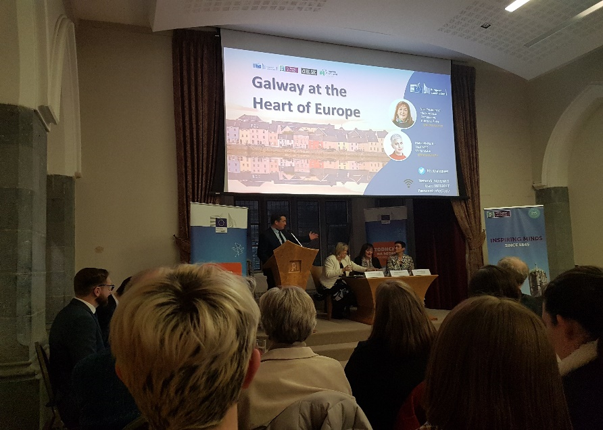 On the 20th of February, NUI Galway hosted a Citizens’ Dialogue on the future of the Europe, centred around Galway’s position at the heart of Europe. The panel was made up of Dubravka Suica, Vice President of the European Commission, Noelle O Connell, who is executive of the European Movement in Ireland and Maria Walsh, the newly elected MEP for the Midlands-North-West constituency in the European Parliament.

In a full capacity at the Aula Maxima theatre, Noelle O Connell gave a short speech in which she spoke about the European Movement in Ireland, the longest running established Irish organization for dealing with EU affairs. She spoke about the importance of debate and dialogue among all citizens in the EU in a time where discourse is becoming more and more polarised. She also referenced the strong undercurrent for the EU in Ireland. To end her speech, she paraphrased the French writer Joseph Joubert when she said; “The aim of argument, or of discussion should not be victory, but progress”.

After her, Dubravka Šuica addressed the audience. She began by thanking everyone for receiving her so kindly and began to discuss why she was there. She explained more about her role and position as Vice President for the European Commission for Democracy and Demography. Firstly, she talked about how there has been a change in demographic in populations across Europe, especially in the eastern part, and that the people who feel left behind by those who are representing them are beginning to blame democracy. It is now a strategic agenda of the Commission to try and bridge the gap between politicians and citizens through Citizens’ Dialogue meetings across Europe. She emphasised that she wanted these discussions to be open, transparent and inclusive. The Commission hopes to talk to citizens and provide feedback to them thereafter. She considered the current landscape in Europe and how “Politics is not business as usual anymore. A civil society is of utmost importance”, and she also remarked that “Trying to figure out where the key areas of dissatisfaction among communities are is vital”.

Specific challenges she mentioned included how life expectancy has increased and how this change could impact upon the pension age. She talked about it as an opportunity, rather than an obstacle to overcome. The Commission are also working to improve portfolios surrounding work/life balance, freedom of movement and living standards in general. She concluded by speaking about the importance of working together and explained that the Commission doesn’t want to interfere with individual member states political agendas, but rather to provide a toolbox for member states to face the challenges previously mentioned.

Next to take the podium was Maria Walsh MEP. A big part of her role within her remit in the European Parliament is helping people understand what she calls “life beyond the M50” and the importance of showcasing the west of Ireland as a great place to live and do business. She described the EU as a union where small states are protected and praised the solidarity Ireland was shown thus far in the Brexit process. She pointed out that Galway 2020 is great for the region but is very small in the broader context on what we have given and got from the EU over the years, and how the Union gives us a framework to share things that were unimaginable a generation ago. She discussed the importance of embracing the current challenges at this critical time in politics. On closing, she mentioned her delight that the panel was all female and encouraged positivity and engagement.

After this, it was time for the audience to engage. An online question forum was introduced, and instant results were projected on the screen so everyone could see. To begin, a poll was made available to the audience to vote on how well they felt represented by the EU. To the delight of the panel, only 14 percent voted negatively. The largest number of votes suggested between a 40%-60% satisfaction rate with their representation. The Vice President was very pleased and said she couldn’t ask for much better. Maria Walsh also echoed her sentiments but was interested in engaging with the fourteen percent.

A range of topics were then brought up by the audience, including the need to engage rural communities with activities in Brussels, reassurance of solidarity, backing the competency of European Commissioner for Trade, Phil Hogan, economic growth, uncertainties around Brexit and lack of funding complemented by a need for a more welcoming work environment for the LGBTQ+ community.

SIN asked about the Brexit transition period in light of the recent election, where, according to the RTÉ exit poll, just 1% of people surveyed said Brexit was taken into account when deciding who to vote for. Referencing this poll, SIN asked if we should be watching the trade negotiations with more intent considering their possible ramifications on every aspect of Irish life. Dubravka Šuica declined to comment concretely and explained that the Commission doesn’t want to interfere with individual member states agendas, but rather listen to citizens and try and figure out solutions. She also mentioned that across member states, there are different worries in every country. She did, however, comment earlier in the evening that the transition period, which concludes at the end of the year, is possibly too short. Maria Walsh addressed its importance and said that the 1% was hard to understand, particularly from a business point of view. She also commented that regardless of the make–up of the next government, that they agree to move forward and with purpose.