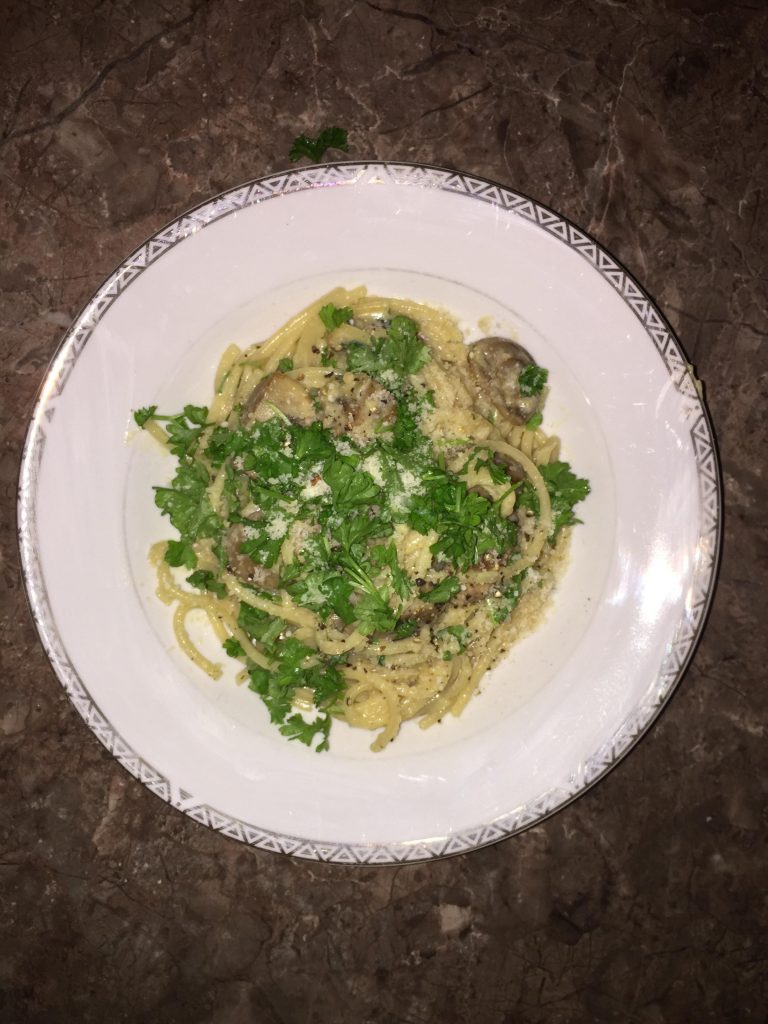 If you’re trying to go meat-less this January but are struggling to maintain protein intake, try this one out. With inspiration taken from Bon Appetit’s Molly Baz, the recipe calls for mushrooms as a substitute for the bacon you’d usually find in a carbonara. Pair those little fungi friends with the eggs that are added in, and you’re onto a protein-heavy winner.

You’ll need a pack of mushrooms, one white onion, five eggs, spaghetti, black pepper, garlic, parmesan and fresh parsley. And I assume you have salt. If you don’t, go sort that out.

There’s no need for fancy mushrooms. The cheap ones are perfect. As for the spaghetti, feel free to swap for another pasta if you prefer. I find spaghetti is one of the cheapest pastas, but not as student predictable as penne. You can skip the parsley, but just know the dish will be much heavier without it, and less colourful too. If you decide to opt in, Masterson’s grocers on Headford Road is, as always, my favourite go-to for fresh herbs. When buying the parmesan, Lidl wins at cheap cheese.

This recipe serves about three and a half people. Or two big rugby boys.

Start by giving the mushrooms a quick rinse and chop. If they’re large, cut into quarters. For smaller ones, just go halves. Remember that they’ll shrink a lot as they cook and lose water. Get two pots, one for the mushrooms and one for the spaghetti. Make sure to salt the water that you boil the spaghetti in. It should be salty enough for the taste to be noticeable from the water, but not so salty that it’s gross. Yes, ‘noticeable’ versus ‘gross’. It’s science, people. Bring to a boil and keep an eye on it, you’re looking for al dente.

In the meantime, bring the mushroom pot to a high heat. Once it’s searing hot, add whatever oil you have (I use olive oil) and add the mushrooms. We want them to be golden on all sides, kind of like the ones you get in a really good fry-up. With that in mind, let them take their time in getting brown, giving a stir every once in a while. You can turn down the heat a bit, but not too much. Only enough to kill the fear that the kitchen’s going to catch fire. While that’s all happening, crush a few cloves of garlic and finely dice the onion. Chop up the fresh parsley so that it’s ready to go. Between two bowls, separate the yolks from the whites in four of your eggs. With the last egg, add, without separating, to the bowl of yolks. You can discard the rest of the egg whites, as we won’t be using them. Unless you want to make a meringue or something. To the egg yolk mixture, add about 25-30 cranks of the pepper crusher and about 100g of parmesan. Mix really well.

At this stage, the mushrooms should be browned off and the spaghetti cooked. Drain the spaghetti, but don’t dispose of the boiling water. Collect it in a glass or jug and keep. Add the onions and garlic to the mushrooms and stir well, making sure the heat is down a bit, so the garlic doesn’t burn. You want the onions to get translucent here. Leave them be, giving an occasional stir. While you wait, you’re going to need to temper the egg mixture. This means warming it up so it doesn’t get a shock and scramble when added to the hot pan. To do this, simply add a bit of the kept pasta water to the mixture and stir quickly. It’s ready when it looks more watery. Turn down the heat of the mushroom pot so that it’s barely on, and quickly stir in the egg mixture. Add the spaghetti. You want to constantly move the contents around so that no egg scrambles. Once you have a creamy looking coating, mix in the parsley and it’s ready to go. Add some extra parsley and parmesan on top if you want to go all out.

And throw a slob of spaghetti at the next person who says you need meat for protein.